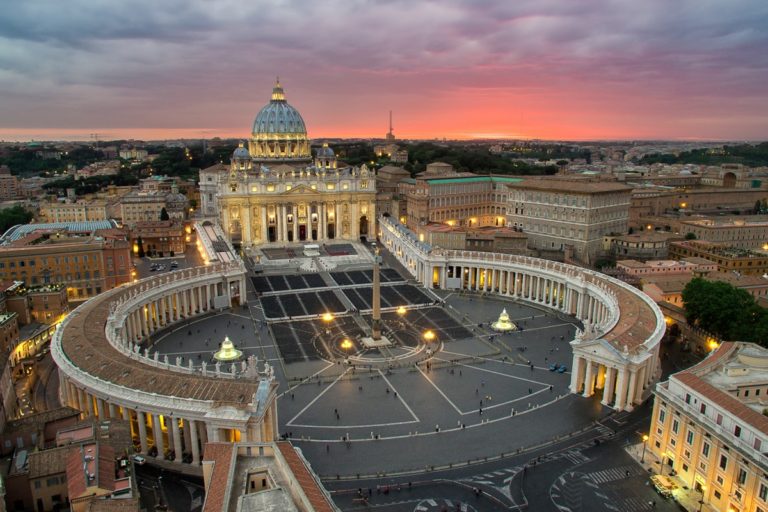 Vatican City is one of the most special and sacred places in all of Christendom and a symbol of great history and spirit of this religion. The small state has a unique collection of artistic and architectural masterpieces, which lie protected within its borders. The center of the city-state is St Peter’s Basilica, alongside the double colonnade, the circular piazza, palaces and gardens. The basilica stands on top of the tomb of St Peter the Apostle, and it is the largest religious building in the world. It is a product of the combined geniuses of Raphael, Bramante, Michelangelo, Bernini and Maderno. The whole city-state of Vatican is on the list of UNESCO World Heritage Sites, and there for significant for many reasons.

Being the most sacred places in Christendom, the city of Vatican City is a testimony to the history of some two millennia. As the site of the tomb of Apostle Saint Peter, who was the first Pope, this is the main pilgrimage center directly linked to the history of Christianity. Also, this is an ideal and exemplary creation of both the Renaissance and Baroque art. The Vatican has been a major influence on the development of arts from the 16th century onwards.

This place has been an independent state since the Lateran Treaty of 11 February 1929. Back then, they were granted territorial sovereignty over 44 ha in the center of Rome, but as an independent country. Vatican City is enclosed by walls and open towards the city through Bernini’s colonnade. The boundaries are made of masterpieces and living institutions, all witness to the unique continuity and the crucial role of this place to humanity. From that point on, the Centre of Christianity has been the permanent seat of the Popes, and an important archaeological site of the ancient Roman world.
The prestigious history teaches us of the incredible architectural and artistic ensemble of priceless value.

Beneath the basilica of Saint Peter, which was reconstructed in the 16th century by the most brilliant architects of the Renaissance, is the first basilica founded by Constantine in the 4th century? In addition, the ruins of the circus of Caligula and Nero and a Roman necropolis from the 1st century AD whit Saint Peter’s tomb are all in Vatican City. Under the patronage of Julius II in 1506, a breathtaking artistic era was inaugurated, when Raphael’s Stanze and of Sistine Chapel were redecorated with frescoes by Michelangelo.

The Vatican Palace came to be after a long series of additions and modifications from the Middle Ages, as the Popes rivaled each other in their status and magnificence. The original building belonged to Nicholas III (1277-1280) and was enlarged in the 15th, 16th and 17th centuries. The arts of the Renaissance and Baroque periods can easily be distinguished on the building.

In 1475, Pope Sixtus IV founded the Vatican Library, the first one opened to the European public. It housed collections of manuscripts, books, prints, drawings, decorative arts, and coins. These valuable collections were constantly increased throughout the coming centuries, which made this building an invaluable legacy of human culture.

In 18th century, the efforts of the many Popes were directed towards the expansion of the private collections of antiquities and artifacts, some dating back to the Renaissance. These were then transformed into public museums that became accessible to scholars and connoisseurs. The Vatican Museums were born. New buildings specifically built to house the classical sculptures also came, like the Pio-Clementine Museum that is a milestone of European culture. The 19th and 20th centuries saw the additions of new and diverse collections and buildings in the tradition of papal patronages.

The boundaries of the Vatican property also coincide with the territory of the State, and they have preserved their original integrity and characteristics for decades. Its unique and exceptional urban, architectural and aesthetic values, no matter the successive additions and changes in the design and form, maintain the highest standards of quality and craftsmanship. They were built on the organic ensemble of harmony that the Christian world possesses. Both the civil and sacred buildings that have been used for centuries have managed to maintain their religious, institutional, cultural and diplomatic functions without any controversies or difficulties.

Because most of the features are still preserved and maintained in their original form and since they still perform their primary functions set in order by the original makers and bound by spiritual and cultural values, this place is one of the most authentic examples of world history and Christian culture. The extensive restoration campaigns that some of the most significant monuments have seen throughout the centuries ensured that the material conservation of the heritage site and strength of the very foundations are safe and serving their full potential.

The People of the Vatican

Most of the citizens who live inside the walls either work in some connection to the Catholic Church or work in the security or as the staff responsible for different things in the city. The clergy and the Swiss Guard are the two most notable groups in the Vatican, while most of the 2400 lay workers live outside and are Italian citizens. In 2011, 594 people lived in Vatican City, of which 71 were cardinals, 109 members of the Swiss Guard, 51 clergies, and one nun. The clergy is the largest group with 307 members.