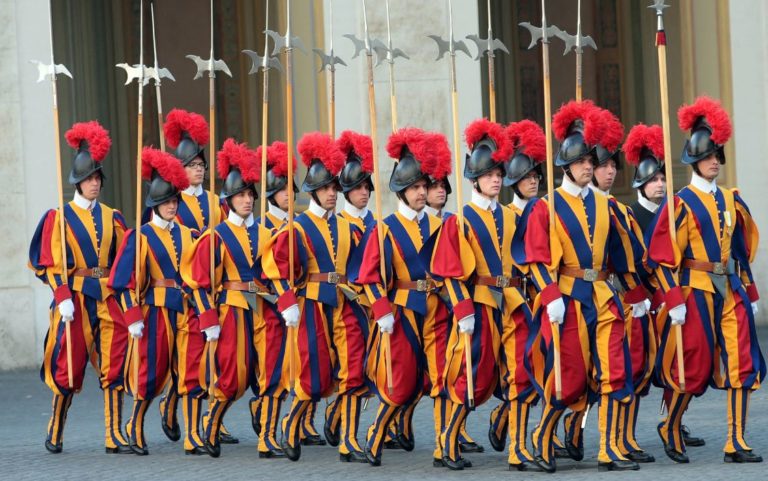 Vatican Guards or Swiss Guards or formally the Pontifical Swiss Guard is one of the most famous and certainly the smallest military formations in the world. This group has a small number of 135 men who have to meet certain criteria in order to become members of the Vatican Guards. We decided to present to you today the history and some interesting facts about this military group that has a great tradition and in the service of the Pope is for more than 5 centuries. In the next article, you will be able to read everything you are interested in about the Vatican Guards. So, if you’re ready, let’s start.

When was the Pontifical Swiss Guard formed and what are its duties?

We said this, often called “the world’s smallest army,” has been in the service of the Vatican and the Papacy for more than 5 centuries. It was formed by Pope Julius II on January 22, in the year of 1506. So, in addition to being the smallest, this is also the oldest force in the world.

Certainly, the most important duty of the Vatican Guards is to preserve the security of the Pope. In addition, this group of men is responsible for keeping Vatican City as well as Castel Gandolfo, the summer residence of the Pope safe.

History of the Vatican Guards

So, this small army was formed 513 years ago. Considering that that period of history was marked by many wars, a large number of men earned money because they were in the service of some army. As one of the best warriors with virtues like courage and above all loyalty, Swiss soldiers highlighted themselves. This fact was also known to Pope Julius II who decided to set Guard’s foundation in the year 1506. The first members of the Vatican Guard were exclusively Swiss, and this tradition is respected even today. They received the title of “Defenders of the Church’s Freedom” from Pope Julius II, and their leader was Captain Kaspar von Silenen.

Another event that shows the courage and extraordinary loyalty of this military organization took place during the Second World War when the leader of the Nazi forces, Adolf Hitler, marched to Rome. On that occasion, this small force took a defensive position in order to defend the Vatican, however, Hitler gave up the occupation of the city.

Also, a very significant situation in which members of this formation showed extraordinary courage was in 1981, when assassins attempted to commit an assassination on Pope John Paul II. A brave man who saved the life of Pope was promoted to the commandant of the guards, but after only a few hours, he was killed by another guard who later committed suicide.

Who are the men who become members of the Vatican Guards?

So, as we mentioned earlier, this group consists exclusively of men that create a group of totals of 135 guards. Before they enter the service, they must meet certain criteria. Certainly, the basic criteria are that they must be citizens of Switzerland. This is part of a tradition that is strictly respected in the Vatican.

In addition, a man whose height is at least 1.74 meters can become a member of the Vatican Guards. Also, he must have a high school degree or a professional diploma. Another requirement for candidates is that they have to undergo basic training with the Swiss military. But this doesn’t mean that the Vatican Guards are also members of the Swiss Army. They are completely separate from the Swiss forces and serve the Roman Catholic Church. Also, it is important to say that all men must be between 19 and 30 years old, and they must not be married.

After being elected, all candidates must take an oath at a solemn ceremony held at the Belvedere Court.
The number of members was not always the same. For example, the first group had 150 members. Over the course of history, several reorganizations of this small army have been done. One such example was 1914 when the group has consisted of a commandant, 15 lesser officers, 110 pikemen, five other ranking officers as well as a chaplain. After 1914, several reorganizations were made, for example, in 1959, in 1976 and the year of 1979. In 1979, the number of members was limited to 100, and the army contained 70 pikemen, 3 other high officers, 24 lesser officers, 2 drummers, and chaplain.

Uniforms of the members of the Pontifical Swiss Guard

As for the uniforms worn by members of this small force, they have been designed centuries ago. These clothes are usually worn on solemn occasions, while the blue beret and blue doublet combination are more often in use. Certainly, the most famous is a colorful combination that has its origins in the Renaissance period of history.

There is even one legend that the great artist Michelangelo designed the uniforms that are best-known, however, this is not confirmed and there are no official and reliable sources that he is a creator. However, the colors that can be seen on the striped tunic are yellow, red and dark blue, and these are actually the colors of the famous Medici family.

In addition to these uniforms, an integral part of one guardian’s equipment is a high plumed helmet as well as a white ruff. As far as armament is concerned, guardians can often be seen with traditional weapons such as pikes and swords, but all members passed military training so that they are trained to use modern weapons as needed.

Locations on which buildings intended for Vatican Guards are located

As members of such a military organization, it is essential that all soldiers are always available for the Holy See. It is therefore logical that their buildings are close to key locations in the Vatican City. For example, buildings used for their needs are located north of St. Peter’s Square, in the eastern part of the city, and of course, close to the Vatican Palace.
As for other sites available to them, they are the chapel of Saints Martino and Sebastiano, while the cemetery dedicated to its members is located not far from the Basilica of Saint Peter and is called Campo Santo Teutonico.

Certainly, there are still very interesting facts about this oldest and smallest military organization in the world. For example, one of the most important days of the year is May 6th. This date represents the day when all men selected to become new members are taking an oath.

Also, their uniform, which we mentioned earlier, is the most complex uniform used by an army today. This uniform consists of as many as 154 pieces, and each one is custom for every guard.

Another interesting fact that we believe all people are interested in is whether these guards make money and if so, what is their salary. Sure, they earn a fair amount of money, and their monthly salary is about €15,600. Of course, it is important to say that this is money that is the basic and can be increased during the service in the Vatican.

Also, you are probably wondering if they have free time for themselves. Certainly, all members have a certain amount of time to spend as they wish and also have days that are scheduled for vacation.