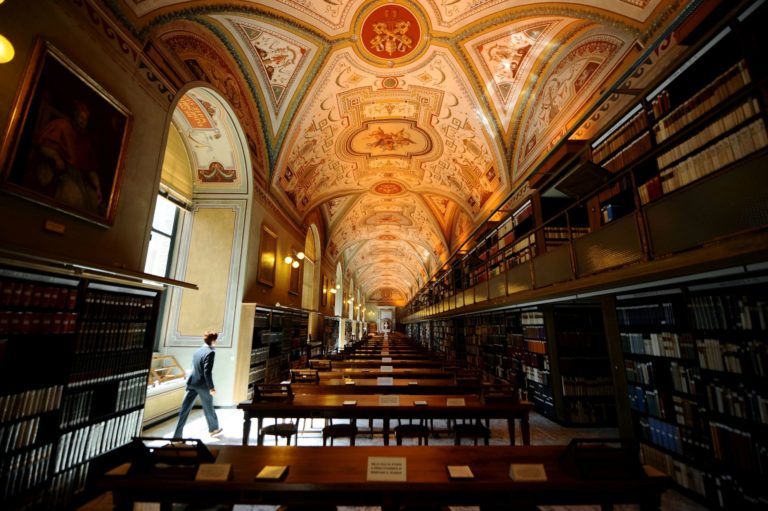 The Vatican Apostolic Library, which is the full title of what is commonly called the Vatican Library, was formally established in 1475. The library itself is, of course, much older, and is one of the oldest libraries in the world.

Pope Nicholas V was a known bibliophile and one of his goals for improvement of Rome was establishing a public library in the Vatican. The Pope wanted to attract scholars as well as pilgrims to Rome and the new library would be a perfect lure for that. He collected an impressive number of books and codices from all over Europe, inducing some texts from the Imperial Library in Constantinople. He also employed Italian and Byzantine scholars to translate the Greek classics into Latin for his library and included many original Greek classics, regardless of their pagan nature. His death in 1455 left the library incomplete, but his successor Pope Sixtus IV continued the work and in 1475 the library was officially opened. It was named the Palatine Library.

In 1587, he commissioned the architect Domenico Fontana to design and construct a new library building, which is still used today. Subsequent popes continued to develop the library. In 1809, after conquering Rome, Napoleon Bonaparte moved all library content to Rome. It was returned in 1817, after his defeat.

Today, it is a modern research library for history, law, philosophy, science and theology. Anyone who can prove the need for such research is free to use it. Between 2007 and 2010, the library went through restoration, which updated many aspects, like the addition of electronic tags to valuable manuscripts to prevent theft. In 2014, plans for the digitalization have been announced, in cooperation with NTT Data Corporation. The process will take years, but eventually, all of the most important works kept in the library will be available on the web site in high resolution.