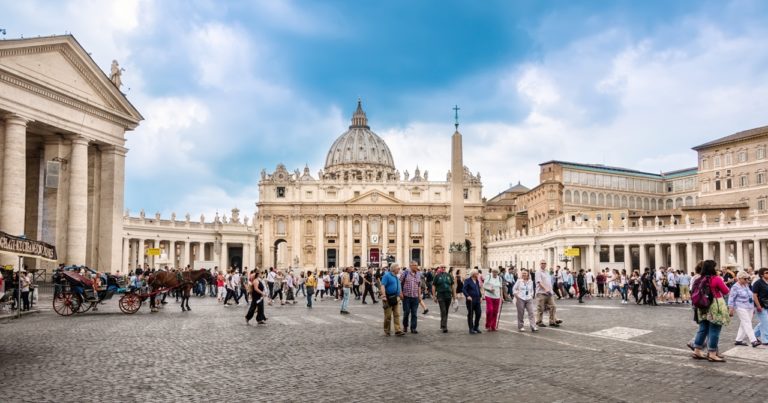 Everyone knows that Vatican City is officially the smallest state in the world. This state-city is one of the most essential places in Christianity and certainly the most important location for the Catholic Church. In the Vatican is the seat of the Holy See and the residence of his Excellency, Pope Francis, as well as all Popes before him.

However, although you might think that there is no crime in this independent state, this is not true. Believe you or not, according to statistics from the previous years, Vatican City is the state that has the highest crime rate in the world. This is not too strange if you pay attention to the number of citizens of the Vatican, which amounts to 1000 persons according to data from 2017. Also, according to the calculations that have been done, the crime rate for Vatican City is 1.5 crimes per person.

This high crime rate is not worrying since in most cases, it is about minor offenses and crimes. It is well known that the Vatican City visits a large number of tourists, even tens of millions of people every year. They visit the main tourist attractions in the city, such as the Basilica of St. Peter, the Sistine Chapel or St. Peter’s Square. At all these locations, there is often a lot of small criminal offenses such as pickpocketing, theft of small bags or shoplifting.

A particularly characteristic place for such thefts is St. Peter’s Square, and most of the attacks by pickpockets occur precisely at this site primarily due to the crowd. However, if we exclude these minor offenses, in the previous period of about half a century, several really serious crimes occurred. In the text below, you can find out what severe crimes happened in the recent history of the smallest country in the world.

Earlier, we mentioned that the Pope’s residence is in the Vatican. This state-city has not had such an assassination attempt so long ago. This incident occurred on May 13, in the year of 1981 when Mehmet Ali Aqca tried to kill Pope John Paul II. Although this was not the first assassination in the history of the Holy See, after this assassination attempt, great focus was on the functionality of the Swiss Guard, whose members later had to undergo training for small arms as well as unarmed combat. This training was aimed at improving the readiness of the members of the Vatican Guard for such situations.

In the previous section, we mentioned the Swiss Guard, which represents the smallest army in the world whose role is to maintain the security of the Pope. However, one case that occurred on May 4th in the year of 1998 was very controversial and still represents one of the biggest scandals in the history of the oldest military formation.

Namely, then, the murder of Commander of the Guard, whose name was Alois Estermann, occurred. This murder took place under unclear circumstances, although Vatican City issued an official announcement and the causes of the death of Alois Estermann and Gladys Meza Romero, who was his wife. According to this report, the spouses were killed by Cédric Tornay, who was also a member of the Vatican Guard. After this crime, Cédric committed suicide.

We must mention one fact because of which this tragedy is even bigger, and that is Estermann entered the rank of Commander of the Guard right on the 4th of May when he was killed.

In the Vatican, in addition to theft carried by pickpockets, there has been a major scandal over the theft of secret documents from this state-city. This situation occurred during January of 2012. Then, the Italian journalist, named Gianluigi Nuzzi, published letters of Carlo Maria Viganò, who was once a high-ranking Vatican administrator. In those letters, he begged not to be relocated for speaking of alleged corruption because of which the Holy See signed contracts for higher prices.

Nevertheless, his prays were not answered because Viganò was later proclaimed Apostolic Nuncio in the United States.
Another person involved in this scandal was Paolo Gabriele, who was a papal butler. Several months later, he was indicted by the Vatican Magistrates for theft of classified documents and he was sentenced to 18 months in prison.

However, another strange situation was the decision that Paolo Gabriele served his sentence in the Vatican barracks instead of going to some of the Italian prisons. Also, we must say that Gabriele was only a few months after the punishment was penalized by Pope Benedict XVI. This happened on December 22, in the year of 2012.

Unlike the previous scandals about the assassination attempt, murder in the Vatican and theft of classified documents, the case with the Vatican Bank is linked to suspicious monetary transactions. Namely, Banco Ambrosiano was involved in the case of laundering drug money in co-operation with the Sicilian Mafia. The whole case would not be linked to the Vatican, but the fact is that the Vatican Bank was the largest shareholder of Banco Ambrosiano, who suffered heavy losses of as much as $3.5 billion.

One of the persons accused of participating in this scandal was Father Marc Marcus, who was the head of the Institute for Religious Works in the period from 1971 to 1989. It is important to note that this affair was one of the biggest financial scandals after the end of the Second World War.

Who is in charge of keeping the law in Vatican City?

As you probably know, the Vatican has its army, which is the smallest and oldest army in the world. The official name of this military formation is the Swiss Guard or the Vatican Guard. According to the tradition, only Swiss citizens can become members of the Swiss Guard, and these are men who have between 19 and 30 years of age and who have never married.
Throughout history, the importance, as well as the great loyalty and courage of Swiss Guard members have been highlighted several times. This military group consists of about 130 members whose main duty is to preserve the security of the Pope. They also keep the Vatican City safe.

According to the Lateran Treaty signed in 1929 and articles 3 and 22 which are part of this document, locations such as the area between Pope’s residence and St. Peter’s Square, as well as other sites that are most attractive to tourists, are under the control of Italian police. Also, if any person is going to be detained for some crime, this will be done by the Italian government on behalf of Vatican City. These two articles show that there are excellent cooperation and connection between the Italian police and the Vatican.

The interesting fact is that there is only one prison in the Vatican, which is not a prison, but a cell for the temporary detention of offenders. However, this space is used for some other purposes, and more everyday situations are those where criminals and offenders are taken to the Italian prisons, while the Vatican pays all the costs of use.