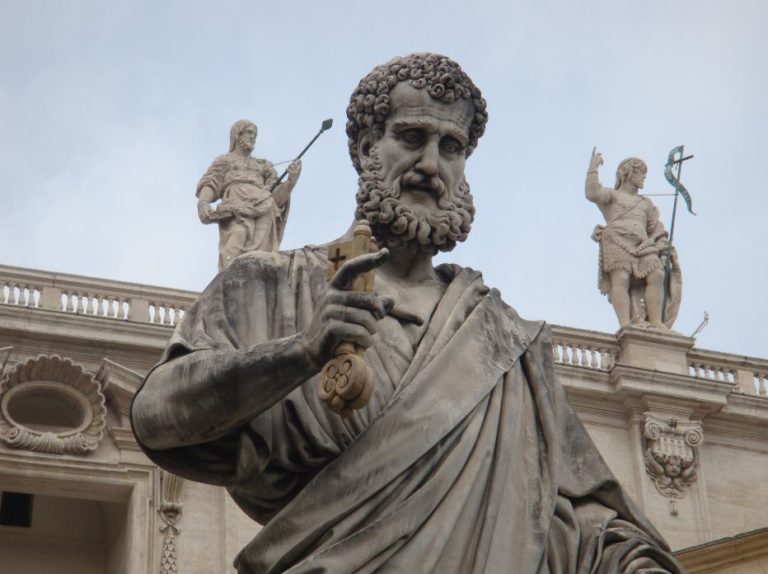 Saint Peter, one of the Twelve Apostles, is known as the first Bishop of Rome, i.e., the first pope ever. Thus, all popes that came afterward are considered to be his descendants. This number is now higher than 260.

Catholic teaching implies that Jesus Christ wanted Saint Peter to have a unique position in the Church, which eventually happened. Namely, in Mathew 16:18, it says that Christ said: “And I tell you, you are Peter, and on this rock, I will build my church, and the gates of Hades will not prevail against it.”

Even though Saint Peter is taken as the first leader of the early Church, it is still worth mentioning that some modern scholars doubt this theory and they suggest that he had very little to do with the founding of the Church of Rome. They believe that such Peter’s position developed as part of the myth throughout history. This could be because very little is known of his life in Rome. There are, of course, legends that imply that his father was a magician and that he had worked as a fisherman before he became the leader of the Twelve Apostles. But it’s always a question of how much we can really rely on legends, right?

According to John Vidmar, a Catholic scholar, Peter really was the spokesman of the Apostles and he simply stood out, which could support the theory that Jesus did pick him to be the leader of the Church. Vidmar says: “Catholic scholars agree that Peter had an authority that superseded that of the other apostles. Peter is their spokesman at several events, he conducts the election of Matthias, his opinion in the debate over converting Gentiles was crucial, etc.” So, it might be safer to rely on what scholars say than what legends and myths imply.