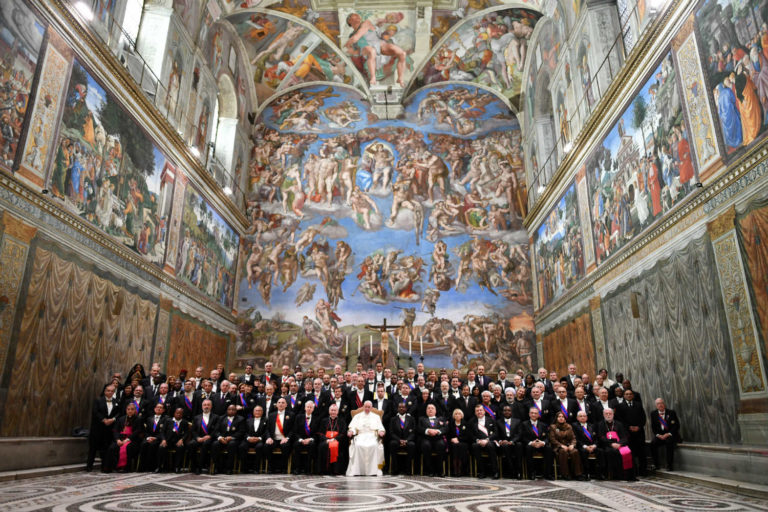 The official residence of the Pope is referred to in various ways. It is known as Papal Palace, the palace of the Vatican, or Apostolic Palace. This palace is in Vatican City, and since the Vatican is a sovereign state, the palace is reigned by the Pope. Furthermore, the Pope can have the palace decorated in accordance with his needs. During the summer, from July to September the Pope usually resides in Castel Gandolfo Papal Palace, even though it is up to the Pope himself to decide where he wants to stay.

History of the Apostolic Palace

The construction of the Apostolic Palace was initiated by Pope Symmachus in the 5th century. Originally, it was supposed to serve as an alternative to the Lateran Palace. It was further altered in the 12th century under the rule of Pope Innocent III. The palace underwent many changes and redecorations under the rule of other popes, such as Pope Sixtus V and Pope Innocent XI. The look this palace has today was created between the 15th and 17th century. The palace is located within 162,000 square meters, and, besides papal apartments, it includes the Vatican Library, Roman Catholic offices, chapels, museums, and art galleries.

There are two main functions of Papal Palace – the administrative and religious function. Since the Vatican has many concerns and responsibilities regarding political, social and economic issues, the complex of the Apostolic Palace, besides the apartments, museums and Catholic Church includes administrative offices which serve to the aforementioned concerns of the church.

Furthermore, it includes the famous Sistine Chapel. Named after Pope Sixtus IV under whose rule it was constructed in 1470, the Sistine Chapel has the crucial role when it comes to the election of the new popes since it is the place where the process of election takes place. This chapel contains numerous works of Christian art, and representations of the life of Christ, Moses, and Temptations of Jesus life. Perhaps the most famous segment of the Sistine Chapel is its ceiling. It was painted by Michelangelo in 1508, and it is said that originally he didn’t want to paint it, since he considered himself to be a sculptor. Also, he didn’t have any experience when it came to painting frescoes. Despite doubting his abilities as a painter, Michelangelo accepted the job and spent four years finishing the ceiling.In addition to his hardship, while creating this work of art, Michelangelo even wrote a poem about it. The poem describes his problems during the painting process, ending with the words: “I am not in the right place – I am not a painter”.

Nowadays, it is wrongly assumed that Michelangelo painted the frescoes in the Sistine Chapel in the laying position. However, the truth is that he was actually standing on wooden scaffolds, which he designed himself, in order to reach the high spots. It might be possible that this misconception comes from the film “The Agony and the Ecstasy” (1965).
The fact that artwork in the Sistine Chapel was restored during the 80s and 90s serves as yet another proof of its significance. The experts had to touch up and strip down both the ceiling and other frescoes, such as “The Last Judgement”.
One of the most famous panels of the ceiling is titled “The Creation of Adam”, and the touching fingers of Adam and God seem to be one of the most famous and recognizable symbols in the world. There are theories that the scene presented behind God is actually the representation of the human brain.

Tours of the Palace of the Vatican

This palace includes rooms and galleries which are to be found within a number of museums. Since these galleries and museums are well-connected, visitors can observe the works of art quite efficiently. Various culturally and historically significant items can be seen in these museums. For example, the antiques in Etruscan and Gregorian Egyptian museums are very popular among the visitors. Also, the Pinacoteca Art Gallery includes paintings from 12th to the 19th century, and Catholic missionaries’ donations are located in Ethnological Missionary Museum, which is considered to be a well-known tourist attraction.