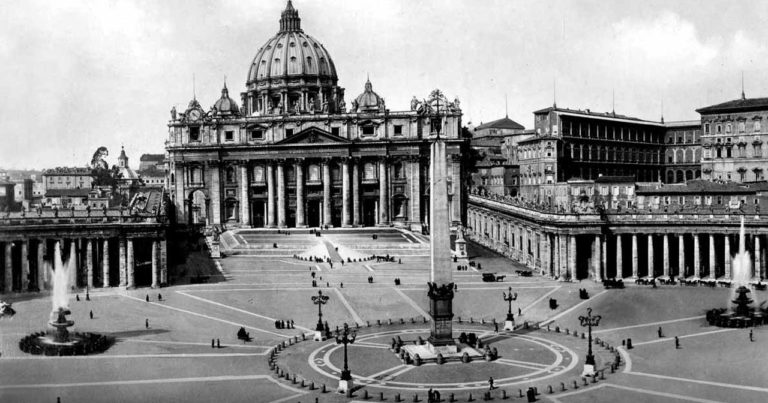 Vatican City was under the leadership of Pope Pius XII during World War II. Besides the fact that Rome was first by Germany and then by the Allies, Vatican City was not occupied and pursued a policy of neutrality. Throughout the duration of WWII, Vatican City organized substantial humanitarian aid.

The sovereignty of Vatican City was recognized by the Lateran Treaty of 1929 with Italy and it declared it as a neutral country in international relations. Hence, the Pope was required to stay aside from mediation, unless it was demanded by all parties. Then, the Vatican City became recognized by 38 nations in 1939.

The city-state of Vatican City government was established in February 1929 when Minister Benito Mussolini and Cardinal Secretary of State Pietro Gasparri signed the Lateran Treaty. One of the clauses of this agreement indicated that the Vatican must remain neutral and won’t act as an intermediary unless all parties agree upon such an arrangement.

So, as this is a religious state, the Pope of the Catholic Church was the chief executive of the country. However, in 1938 when Italy forbade the marriage between Jews and non-Jews, the Holy See considered it to be a breach of the Lateran Pacts. In 1939, Eugenio Pacelli became the head of the Catholic Church and took the papal name, Pius XII. As soon as he became a pope, he implemented several policies which protected Italian Jews.

Then, just as the European War was about to start in 1939, Pope Pius XII attempted to mediate between the powers to maintain peace. He also received Mussolini’s agreement on this decision. Consequently, it was reached out to Vatican representatives in several countries, such as France, Britain, and Germany. Nevertheless, it was recommended that Poland should accept a German annexation of Danzig, but Poland refused and Pope Pius XII didn’t accomplish much with his efforts.

Pope Pius XII did his best to protect Vatican City and maintain its neutrality during the conflict. However, there was one thing he did which received backlash and was considered as a violation of his stance. The Catholic Church in Poland was appointed with a German Apostolic Administrator to lead it in May 1942. This action was very controversial during WWII. Moreover, it resulted in a huge breach between the diplomatic relationship of Poland and Vatican City. Consequently, Vatican City did not appoint an Apostolic Nuncio to Poland between 1947 and 1989.

Throughout the duration of the war, the Nazi systematic extermination of various groups was never publicly condemned by the Vatican City. Even though he was attempted to be persuaded, Pope Pius XII claimed that he wasn’t able to speak of the Nazi atrocities without also bring up similar Soviet practices. Nevertheless, in his 1942 Christmas address, he mentioned the human aggression and racial violence but didn’t specifically name anyone.

As Vatican City is situated within Rome, the bombing of the Italian capital city was very infrequent as the Allies did not wish to violate Vatican City’s neutrality. A number of complaints were filed when the Allies dropped propaganda pamphlets over Rome and some of them ended in Vatican City.

In 1943 Italy capitulated to the Allies and Rome was soon occupied by German troops, but Vatican City wasn’t occupied. During this transition time, a huge number of Allied prisoners of war were released by their Italian captors and many of them headed for Vatican City. However, as the Holy See feared for its neutrality, the Swiss Guard was requested to prevent them from entering the country’s borders. However, many Vatican officials acted independently and accepted these former Allied fighters. It was believed that there have been thousands of Jews hiding in Vatican City during this time.

In September 1943, the Germans in Rome asked for 100 pounds of gold in 36 hours from the local Jewish community otherwise 300 Jews would be deported. As the community didn’t have that much gold, the Vatican provided this amount. Even though this act saved the 300 Jews, only a month later, 2,091 Jews were deported anyway. The Vatican wasn’t able to do anything back then, but it is believed to have saved thousands of Jews during the Holocaust.

Besides the fact that Pope Pius XII was attempted to be persuaded to act as a mediator of passing information about German resistance of Hitler to the British, he didn’t offer his support to the British. In 1947 the Lateran Treaty was incorporated into the Constitution of the Italian Republic.