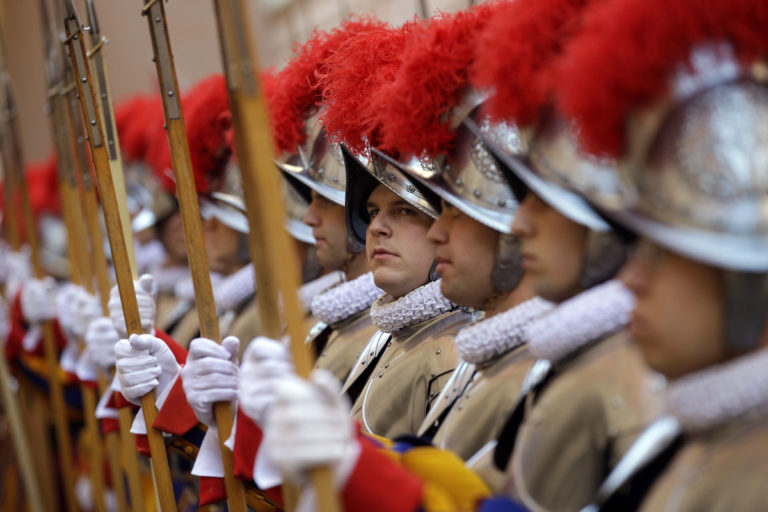 The Swiss Guards of Vatican, in the Italian language known as Guardia Svizzera, is the corps of Swiss-born specially trained soldiers who are responsible for the safety of the Pope inside the walls of Vatican City. They are often called “the world’s smallest army” and they serve as the personal escorts to the pontiff, as well as watchmen for Vatican City and the villa of Castel Gandolfo where the Pope resides. These guards are independent of the official Swiss army and are employed by the Roman Catholic Church. Since it is under the leadership of the Pope, they are as well, and they swear fealty to him in a special ceremony at Belvedere Court.

The guards are also called the Vatican City police, however, there is a separate police force charged with the overall security of the small state, while St. Peter’s Square is under the jurisdiction of the Italian police.

Competition can be intense for the inclusion in the Swiss Guards, as it is a prestigious position. All new recruits must be unmarried Roman Catholic males who have Swiss citizenship. Next, they have to be between 19 and 30 years old, and at least 1.74 meters tall. Education wise, they must own a professional diploma or at least a high school degree. They must also have completed basic training as members of the Swiss military. Earlier, all new recruits had to prove they did not have any physical deformities, while the commanding officers were of noble lineage.

These guards have a very special uniform. Normally, they wear blue doublets and blue berets. However, during the many ceremonial occasions, they change into a colorful Renaissance-era uniform that they are famous around the world. These some of the oldest uniforms still in use. It is thought Michelangelo designed them, which is very questionable and probably made up. Their tunics are striped in Medici family colors of red, dark blue, and yellow, and they also white ruffs, as well as high plumed helmets with ostrich feathers colored t in different colors that reflect different ranks. On some occasions, they also have armor. Traditional dress style means the guards carry pikes and swords, however, all of them are also trained in modern weaponry and counterterrorism tactics.

Living quarters of the Swiss Guards are located along the eastern edge of the city and north of St. Peter’s Square, next to the Vatican palace. Chapel of Saints Martino and Sebastiano is theirs, while the Campo Santo Teutonico near St. Peter’s Basilica is their cemetery.

The mercenaries from Switzerland were thought of as some of the best soldiers in the world. One of the proofs for this is a statement from the ancient Roman scholar Tacitus: “The Helvetians are a people of warriors, famous for the valor of their soldiers”. They served various ruling powers of many European countries and were in highest of demands in France and Spain. They started serving the Papal States in during the 14th and 15th centuries, as in 1505, the Swiss bishop and later cardinal Matthäus Schiner, who was acting on behalf of Pope Julius II, proposed that a permanent Swiss contingent be made, under the direct control of the Pope himself. On January 22 of 1506, the first group of 150 Swiss guardsmen that was led by Captain Kaspar von Silenen came to the Vatican.

This small army quickly earned a reputation for bravery and self-sacrifice, which was demonstrated during the sack of Rome in 1527, when just 42 of the then 189 guardsmen died while defending Pope Clement VII. They prepared for similar sacrifices during World War II, when they were vastly outnumbered while defending their positions while German forces entered Rome. They did not have to act, however, as Hitler never attacked their state.

In 1981, the Swiss Guard protected John Paul II during an assassination attempt at the Square of St. Peter. The guardsman who rushed to the aid of the pope became a hero and was later named commandant in 1998. Sadly, mere hours following the promotion, he and his wife were shot and killed by a lower-ranking guard, who committed suicide. These three were the first murders that happened inside the walls of Vatican City since the middle of the 19th century.