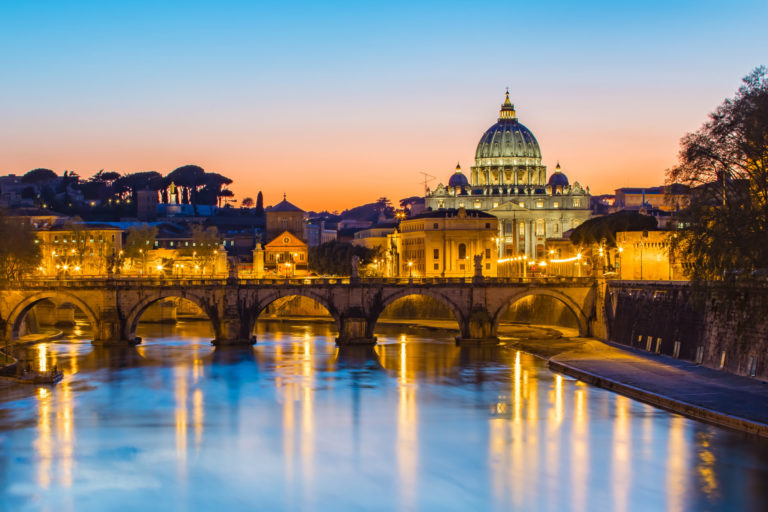 The Vatican, or officially Vatican City State, is the last remnant of once powerful Papal States. The term Vatican was in use all the way back to the Roman Republic, denoting the marshy area on the west bank of Tiber, across the ancient city. The area was considered sacred and for a long time it was uninhabited until Agrippina the Older drained the swamp. Caligula and Nero further developed it, constructing various public buildings and a circus. It was Caligula who brought an obelisk from Egypt and erected it on what is today known as St. Peter’s Square.

For centuries after the fall of Rome, popes ruled large swaths of Italian peninsula until the Italian revolution in the 19th century. The Papal States were annexed into the new Kingdom of Italia. The Vatican as we know it today came into existence in 1929, when the Lateran Treaty was signed, creating a new independent state centered on Vatican Hill. It has an area of 44 hectares (110 acres) and around 1,000 inhabitants. The enclave is the smallest independent country in the world and is an elective absolute ecclesiastical monarchy, with the pope serving as head of state with full legislative and executive powers.

For the most part, the Vatican’s two-mile border follows Leonine Wall, built by previous popes. At one point, the entire Vatican Hill was enclosed within the wall, but today there is a gap on the St. Peter’s Square, with a white line denoting a border between Vatican and Italy. The rest of the wall has five gates, guarded by the Swiss Guard. The entrance into the city doesn’t require a passport identification, so anyone can enter. The easiest way to enter the Vatican is through St. Peter’s Square and the Villa della Conciliazione or through the Vatican Museums on the Viale Vaticano on the north side of the city.