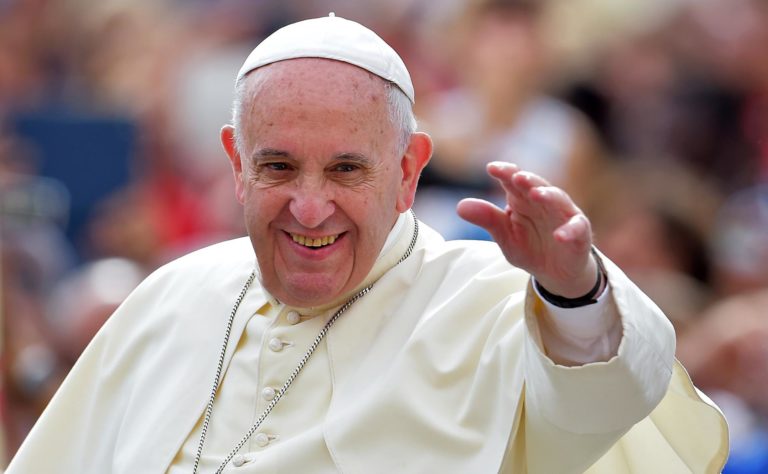 Pope Francis was born as Jorge Mario Bergoglio on 17 December 1936. He is the head of the Catholic Church and the sovereign of the Vatican City State. The current Pope is the first Jesuit pope, the first from the Americas, and the first from the Southern Hemisphere. He is also the first Pope to visit the Arabian Peninsula, and the first outside of the European continent since the Syrian Gregory III in the 8th century.

Francis was born in Buenos Aires, Argentina, and was ordained as a Catholic priest in 1969. Between 1973 and 1979, he was the provincial superior of the Society of Jesus (Jesuits) in Argentina. He was elected the Archbishop of Buenos Aires in 1998 and became a cardinal in 2001 when he was given the prestigious rank by Pope John Paul II. During the December 2001 riots in Argentina, he led the Argentine Church. The administrations of Néstor Kirchner and Cristina Fernández de Kirchner thought of him as a political rival. When Pope Benedict XVI resigned on 28 February 2013, the papal conclave elected Bergoglio as his successor on 13 March, the 266th Pope. He chose Francis as his papal name, to honor Saint Francis of Assisi. He was 76 at the time.

Pope Francis is famous for his humility, emphasis on the mercy of God, international visibility as Pope, and genuine concern for the poor and less fortunate. He has a less formal approach to the papacy than most of his predecessors. An example of this is his residence of Domus Sanctae Marthae guesthouse, instead of the papal apartments of the Apostolic Palace. He believes the Church should be more open and welcoming and does not support unbridled capitalism and Marxist versions of liberation. Pope Francis has always maintained the traditional views of the Church when it comes to abortion, marriage, the ordination of women, and celibacy among the clerics. He opposes consumerism and overdevelopment and fully supports tackling climate changes. He helped restore full diplomatic relations between the USA and Cuba and supported the European migrant crisis. Since 2016, the Pope has faced criticism from regarding civilly divorced and remarried Catholics to Communion, and the alleged coverings of clergy sexual abuse.

The Best 20 Quotes by Pope Francis

1. He who doesn’t pray to the Lord prays to the devil.
2. We have to work harder to develop a profound theology of women within the church. The feminine genius is needed wherever we make important decisions.

4. A little bit of mercy makes the world less cold and more just.
5. Tell me: when God looks at a gay person, does he endorse the existence of this person with love, or reject and condemn this person?… It is necessary to accompany them with mercy.
6. Money has to serve, not to rule.

8. The media only writes about the sinners and the scandals, he said, but that’s normal because ‘a tree that falls makes more noise than a forest that grows.
9. Human rights are not only violated by terrorism, repression or assassination, but also by unfair economic structures that create huge inequalities.
10. Since God created the world, He also created reality.

12. I prefer a church which is bruised, hurting and dirty because it has been out on the streets, rather than a church which is unhealthy from being confined and from clinging to its own security.
13. Religion has the right to express its opinion in the service of the people, but God in creation has set us free: it is not possible to interfere spiritually in the life of a person.
14. Work ends up dehumanizing people.

16. Life is a journey. When we stop, things don’t go right.
17. We must restore hope to young people, help the old, be open to the future, spread love. Be poor among the poor. We need to include the excluded and preach peace.

19. Politics is a noble activity. We should revalue it, practice it with vocation and dedication that requires testimony, martyrdom, that is to die for the common good.
20. No one can grow if he does not accept his smallness.