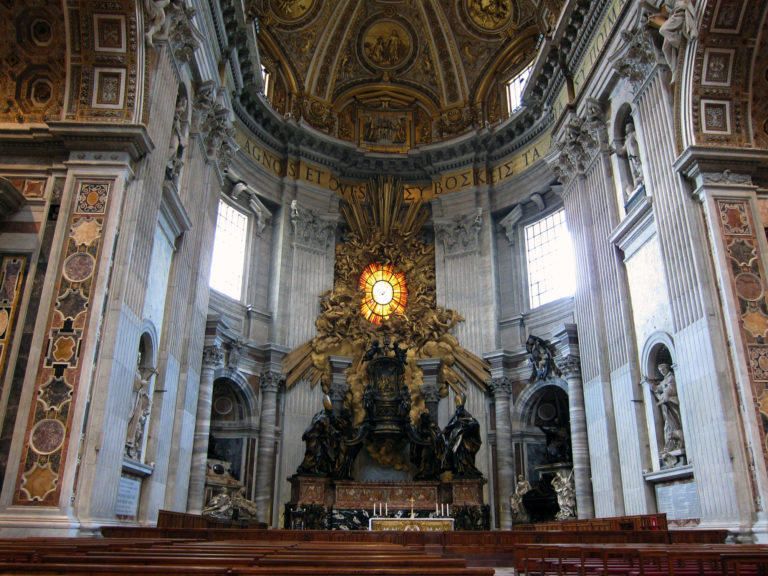 The Chair of Saint Peter, or the Cathedra Petri in Latin, is also known as the Throne of Saint Peter. It is a Christian relic kept safe in the St. Peter’s Basilica in Vatican City, which is the sovereign enclave of the Pope within the capital city of Italy, Rome.

This throne is a wooden chair. According to Christian tradition, the Apostle Saint Peter who was the leader of the Early Christians in Rome as well as the first Pope, used it during his days as the Pope, or the Bishop of Rome how they are also known. The throne is encased in a sculpted gilt bronze casing, which Gian Lorenzo Bernini designed and made between the years of 1647 and 1653.

In 2012, Pope Benedict XVI said that this iconic chair is “a symbol of the special mission of Peter and his Successors to tend Christ’s flock, keeping it united in faith and in charity.”

Originally, this wooden chair was a gift from the Holy Roman Emperor Charles the Bald, to Pope John VIII in the year 875. Over the years following this, the throne has been studied many times. The last of these studies so far took place from 1968 until 1974, when it was last removed from its home at the Bernini altar. This research concluded that it was a single chair with a covering and that and that it is not older than the sixth century.

This important Chair is the official cathedral of St. Peter’s Basilica. If you are wondering what that is, a Cathedra is the Latin word for “chair”, or “throne”, and it denominates the place where a bishop sits. Therefore, it has become symbolic to use “cathedral” as the Bishop’s church. Many Popes formerly used this Chair to sit on. It is not the same chair as the Papal Cathedra in St. John Lateran Archbasilica, also located in Rome, which is the actual cathedral of the Pope.

Back to the throne in question, the relic is described as an oaken chair that has been damaged by cuts and worms over the centuries. It has metal rings on each side, to be used as a sedia gestatoria. The back and front are trimmed with carved ivory. This is a description from 1867 when it was photographed and displayed for veneration.

Symbolically, the chair by Bernini had no earthly counterpart in contemporary furnishing of the time. It is made of scrolling members, which enclose a cover panel. The upholstery pattern is a low relief of Christ instructing Peter to look after his sheep. Moreover, there are large angelic figures beneath a highly realistic bronze seat cushion, which is vividly empty. The relic is encased within it.

The Vatican Throne stands on scrolling bars effortlessly supported by four oversized bronze Doctors of the Church, who are the Western doctors Saint Ambrose and Saint Augustine of Hippo, and Eastern doctors Saint John Chrysostom and Saint Athanasius. The cathedral looks as if it is hovering over the altar in the apse, and it is lit by a central tinted window. The style is a fusion of the Baroque arts, which unify sculpture and richly polychrome architecture with the manipulating effects of light.

On the golden background of the frieze above it, there is an inscription in Latin that reads, “O Pastor Ecclesiae, tu omnes Christi pascis agnos et oves”. This means, “Oh pastor of the Church, you feed all Christ’s lambs and sheep.” On the right, the same is written in Greek. Behind the altar, there is the monument of Bernini enclosing the wooden chair. Both are symbols of the authority of the Bishop of Rome as the Vicar of Christ on Earth, and the successor of Saint Peter.

Also on the topic of the Vatican Throne is The Resurrection, or La Resurrezione, an 80 metric ton bronze and copper-alloy sculpture made by Pericle Fazzini in the Paul VI Audience Hall, located in Rome.

This marvelous sculpture captures the anguish of the 20th-century mankind that was living under the constant threat of a nuclear war. La Resurrezione depicts Jesus Christ, who is rising from a nuclear crater following the war, in the Garden of Gethsemane.

Its dimensions are 66 ft. × 23 ft. × 10 ft., or 20.1 m × 7.0 m × 3.0 m. This work was ordered by Count Galeassi in 1965, and the casting for it began at the Michelucci Art Foundry in Pistoia, in 1972. The final sketch for the art piece came in 1975, while it was completed on September 28, 1977. This intriguing statue was restored over a period of three months in 2011.
This sculpture is important because the Pope can often be seen sitting on one of his chairs in front of it, during important gatherings of the Catholic Church.

Fazzini wrote about his work: “Suddenly there came to me the idea of Christ preaching peace for 2,000 years and the place where he prayed for the last time: the olive grove of Gethsemane. I had the idea of depicting Christ as if he were rising again from the explosion of this large olive grove, peaceful site of his last prayers. Christ rises from this crater torn open by a nuclear bomb; an atrocious explosion, a vortex of violence and energy.”