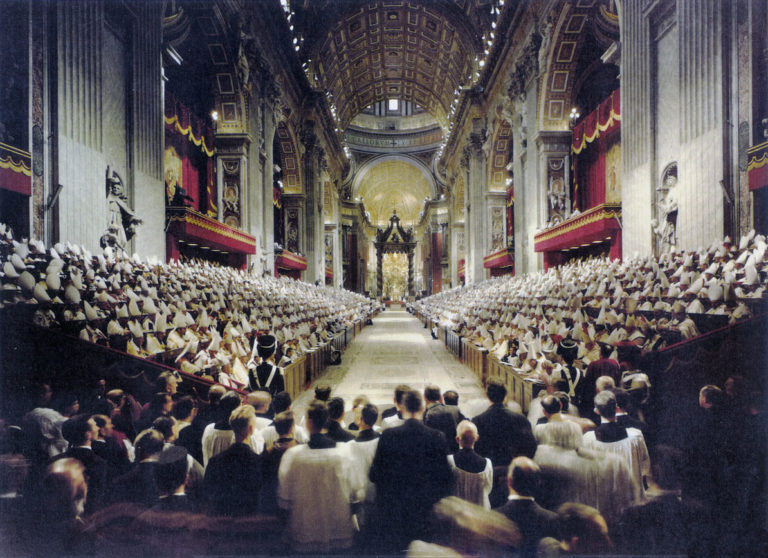 More than half a century has passed since the Second Vatican Council approved Lumen Gentium, yet it still stays as relevant and important as it was on the day it was passed.

The Dogmatic Constitution on the Church is a central document that increased the authority, identity, and the mission of the church. In line with all significant Roman Catholic Church documents, it is colloquially known ad Lumen Gentium (Light of the Nations), the first words in the document. It was passed by 2,151 votes to 5 of present bishops. It was promulgated by Pope Paul VI and contains eight chapters, defining the role of the Church in modern times.

Chapter 1: The Mystery of the Church

The first chapter states that “all the just, from Adam and ‘from Abel, the just one, to the last of the elect,’ will be gathered together with the Father in the universal Church, … a people made one with the unity of the Father, the Son and the Holy Spirit. Christ made His brothers, called together from all nations, mystically the components of His own Body.” It clearly describes the Church’s supernatural unity.

Chapter 2: On the People of God

The second chapter states one of the most important declarations in Lumen Gentium, establishing that the Church is the people of God and that the Church’s missionary love extends to all men. “God, however, does not make men holy and save them merely as individuals, without bond or link between one another. Rather has it pleased Him to bring men together as one people, a people which acknowledges Him in truth and serves Him in holiness.”

Chapter 3: The Hierarchical Structure of the Church and In Particular on the Episcopate

Chapter Three describes the Church’s apostolicity, comparing the college of bishops to the college of apostles. It equates the mission God gave Jesus to the one Jesus gave his apostles, using some of the most solemn phrases possible (“This Sacred Council … teaches and declares …”).

Dealing with lay faithful, Chapter Four confirms that Christ’s mission is threefold and messianic and conducted through both the laity and the hierarchy.
“The supreme and eternal Priest, Christ Jesus, since he wills to continue his witness and service also through the laity, vivifies them in this Spirit and increasingly urges them on to every good and perfect work.”

Chapter 5: The Universal Call to Holiness in the Church

The universal call to holiness is one of the crucial points in the Roman Catholic Church and the entire Chapter Five is dedicated to it.

Chapter 6: The Religiousdel Christ’s life left us as an inspiration and a blueprint for us to follow.

The last two chapters, The Eschatological Nature of the Pilgrim Church and Its Union with the Church in Heaven and The Blessed Virgin Mary, Mother of God, in the Mystery of Christ and the Church, Lumen Gentium describes the behavior that stipulates the real virtue. The faithful should seek to emulate Mary and the saints and their behavior to show sincere veneration. The unity of church on Earth and Church in Heaven is heavily emphasized, as evident by this passage: “Until the Lord shall come in His majesty, and all the angels with Him and death is “destroyed, all things are subject to Him, some of His disciples are exiles on earth, some having died are purified”, and others are in glory beholding “clearly God Himself triune and one, as He is”; but all in various ways and degrees are in communion in the same charity of God and neighbor and all sing the same hymn of glory to our God. For all who are in Christ, having His Spirit, form one Church and cleave together in Him.”

One of the reasons behind Lumen Gentium was the need for Christian unity, something Vatican placed a high value on. The different views on Mary were often a stumbling block among various Christian churches and Lumen Gentium sought to rectify this by viewing Mary as a unifying factor rather than a divisive one. The Second Vatican Council proclaimed her Mediatrix, in order to honor her role as one of the original Mediators of Christianity.

One of the matters that caused the greatest controversy was that some people thought that Lumen Gentium left a possibility of salvation outside the Church. The point was clarified in 2000, when the Vatican issued Dominus Iesus, reaffirming the Church’s unique role in salvation, sanctification, and mission.