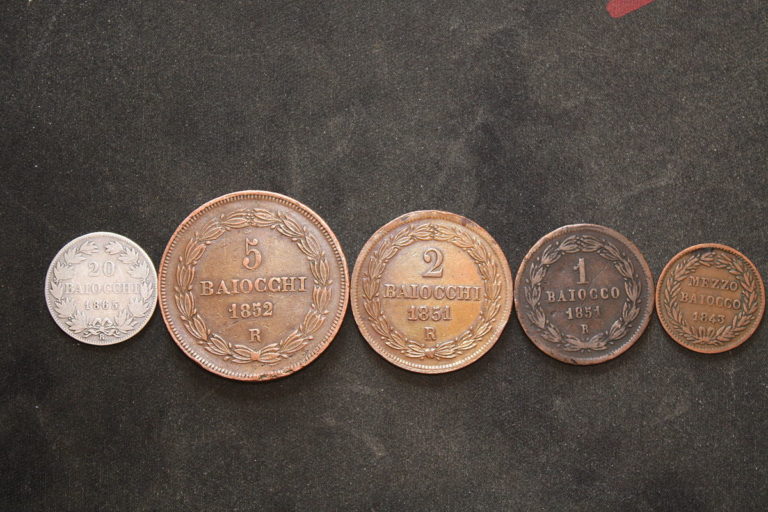 The history of Vatican currency is a long one. The oldest papal coins we know of were stamped by Pope Zacharias (741-52), Pope Gregory III, and possibly Pope Gregory II (715-741). The reason earlier popes didn’t make their own money is that the right to coin money belonged to sovereigns and early popes didn’t have any temporal powers. It was around the eighth century that Byzantine emperors granted them Præfectus Urbis title, which allowed them to struck coins like any other local magistrate in the empire. Coins of Pope Gregory and Pope Zacharias follow the same pattern since they were considered first civil magistrate of the City of Rome and were entitled to make coins bearing their names.

The popes coined their money in papal mint until 1143, when the Senate of Rome, seeking to limit papal influence in the duchy of Rome, took it over. There were no papal coins until 1305 when King Philip IV of France managed to install his puppet Clement V as Pope. Four years later, Papal court was moved to Avignon and popes resumed making their own money, a tradition they kept even when the papacy returned to Rome in 1376. As the Papal States consolidated, their currency became known as Roman scudi, consisting of 100 baiocchi. One baiocco was worth five Quattrini. Other coins in use were Grosso, worth five baiocchi, carlino (7½ baiocchi), the testone of 30 baiocchi, the doppia of 3 scudi, and the giulio and paoli, both worth 10 baiocchi.

Many local municipalities issued scudi, in addition to Rome, who issued them for the entire Papal States. In 1785, the first paper scudi were issued by Santo Monte Della Pietà di Roma and later by Banco di Santo Spirito di Roma.

In 1798, Napoleon sent General Louis Alexandre Berthier to invade Rome, which he successfully did and promptly established the Roman Republic, modeled on revolutionary France. Although later re-established, Papal States de facto ceased to exist as independent political power until Napoleon’s defeat in 1814. Scudi was returned to circulation and remained as the official Vatican currency until 1866.

In 1860, the Italian revolution was well under way, and the process of the unification has begun. The Papal States was one of the last to stand against the efforts of Sardinia. On September 18, Papal army of some 10,000 was defeated by the much larger Sardinian army of 39,000 men in the Battle of Castelfidardo, which marked the end of Papal States. Pope lost all authority over provinces of Marches and Umbria and was left with only Latium, the area surrounding Rome. Six years later, Pope Pius IX joined the Latin Monetary Union and a new currency was introduced, called lira.

Pope issued their own version, called Papal Lira, which was equal in value as the Italian lira. Papal lira existed for just four years and was abolished when Italia annexed Rome in 1870, limiting papacy to the modern-day Vatican. The Vatican was without its currency until 1929, when the Lateran Treaty was signed between the Kingdom of Italia and Papacy, creating an independent papal state within Vatican walls. One of the stipulations of the treaty was the Vatican’s right to its own money, called the Vatican lira. It was also legal tender in Italy and San Marino. Despite being a sovereign currency, Vatican lira had the same value as an Italian one. For the most part, the Vatican used its prerogative to issue commemorative coins on a wide variety of topics. Almost every year, a new series of coins were minted. A vast majority was sold in mint sets, but some of them ended up in circulation.

In 2002, despite the fact that the Vatican isn’t a member of the European Union or Eurozone, Vatican lira was discontinued, and Euro was introduced as official currency. According to the agreement with Brussels, Vatican can mint its own euro coins, which are designed by Philatelic and Numismatic Office of the Vatican City State and minted by Istituto Poligrafico e Zecca dello Stato (IPZS), in Rome.

The first series of 1 cent, 10 cents, and 1 Euro coins was stamped with an effigy of John Paul II. In 2005, the second series was issued, bearing Insignia of the Apostolic Chamber and the coat of arms of the Camerlengo of the Holy Roman Church. The third series in 2013 had an effigy of Benedict XVI, while fourth had an effigy of Francis. The fifth series was first minted in 2017 and all three coins bear the coat of arms of Pope Francis and European Union stars.