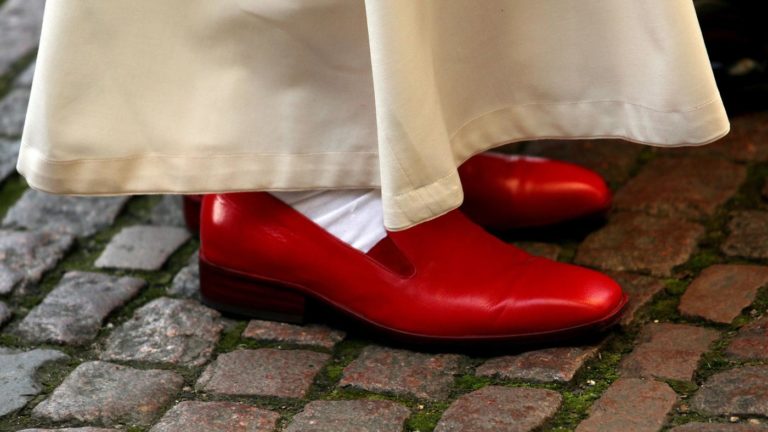 Many people remember Pope John Paul II, who was one of the most significant popes of all times. There are various stories about him regarding his influence on the fall of communism and spreading of the faith. However, many people have also noticed that he was also famous for the red shoes he used to wear. It should also be noted that the new pope, Francis, does not wear this kind of shoes. To make things even simpler, we would mention that there are not various kinds of shoe colors that popes used to wear, there are only three of those. First of all, there are the shoes that the popes used for the walks inside the Vatican and they are red. Secondly, there are unique sandals that are used during the Mass. And finally, there are shoes that are made of leather and they are used outside the Vatican.

It needs to be added that the red ones are usually described as the ones that are used to display power. The history of them is much older than the popes themselves. To be more precise, they were used in the Etruscan times when their kings used to wear red shoes in order to show their high status. They were then described as royal purple shoes. Furthermore, the emperors of Rome adopted this custom of wearing red shoes to show status as well as other aristocracy members from that period.

The tradition of wearing red shoes quickly started to be very popular also among the people who were high church members and officials. However, this also changed in the 16th century when the clergy started to wear white ones. The red color of the shoes was used to show that the Pope has not only the supreme authority in the world, but they were also used to indicate the Passion of Christ. Furthermore, they are the sign that the Pope is Christ’s subject. In addition to this, it is also believed that the shoes represent all the people who gave their lives for Christ and the faith.

First of all, we should mention that the shoes are made of leather and that leather usually comes from Morocco. It should also be added that they typically have a golden cross embroidered. Some popes decided for this cross to be removed at approximately the same time when it was decided that the subjects would not kiss papal shoes anymore. It should be also mentioned that it was also decided that all buckles would be also removed on all shoes that would be worn and there was another decision that silk slippers would not be worn, too.

However, it should be also added that the decision on the color of the shoes that a pope would wear is only up to the pope and that there is not any rule that predefines this. So, when Francis became a new pope, he decided that he would not continue this tradition and that he would not wear red shoes all the times anymore.

The Pope would continue to wear this kind of shoes only when he is in his residence. On the other hand, he decided that the shoes he would wear outside the residence would be of black color. He used to wear these even when he was not a pope and they are the clear sign of humility and austerity. All of his shoes are made by his own shoemaker Carlos Samaria.