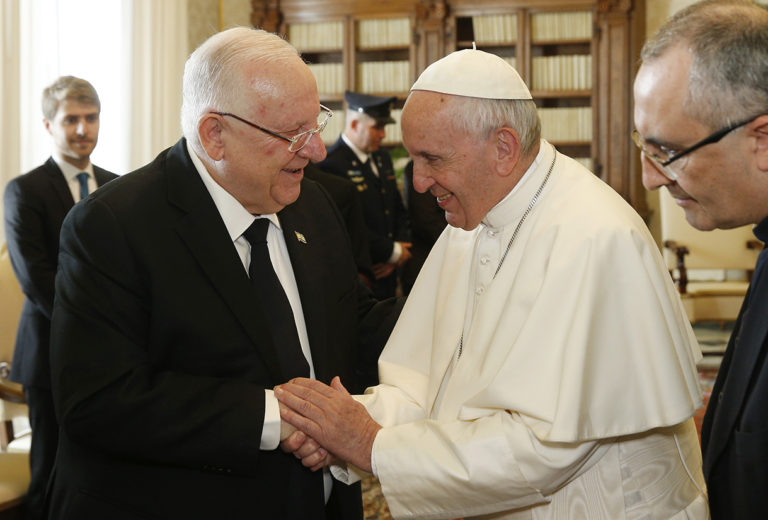 The history of the Vatican and Israel’s relations is a turbulent one, and for a long time it was marred with the animosity Papal state felt towards Judaism as a whole. On the other hand, Israel was convinced that the Vatican owes an apology to Jews for the way they have been treated by the Catholic Church throughout the centuries of pogroms and persecution in Europe.

The tone of Holy See–Israel relations were mostly set by Pope Pius XII, who was on Saint Peter’s throne during the formation of Israel State in 1948. He was very reluctant to grant the support of the Holy See to the new Jewish state and that was the attitude all subsequent popes embraced. At one point, David Ben-Gurion, the first prime minister in Israel, frustrated by all the behind the scenes maneuvers by the Vatican, said: “There is a major religion in the world, which has to settle with us a historical reckoning.”

The Vatican expressed two points of concern when it came to creating the new state. One was the admission of all Palestinian refugees back and the other was the protection of holy sites. Israel tried to assure the Holy See that it will enforce freedom of religion and protection of all holy sites, including Christian and Muslim ones, but that didn’t stop Pope Pius XII from issuing several encyclicals, expressing concern over those issues. One of them, called Redemptoris nostri cruciatus, said: “… tranquility or order in Palestine is still very far from having been restored. We are still receiving complaints from those who have every right to deplore the profanation of sacred buildings, images, charitable institutions, as well as the destruction of peaceful homes of religious communities. Piteous appeals still reach us from numerous refugees, of every age and condition, who have been forced by the disastrous war to emigrate and even live in exile in concentration camps, the prey to destitution, contagious disease and perils of every sort.”

French Catholic newspaper La Documentation Catholiques went even farther and compared Zionism to Nazism.
The main goal of Redemptoris nostri cruciatus was to incite Catholics all over the world to put pressure on their respective governments to block Israel from being admitted to the UN.

One of the key Vatican representatives in Israel was the Franciscan Custos of the Holy Land Alberto Gori. He was extremely critical on the Jewish state, often accusing them of destroying holy sites. Pope Pius XII made him the Latin Patriarch of Jerusalem in 1949, creating even more tensions between Israel and the Vatican. At the time, Jerusalem was divided to West, under the control of Israel, and East, controlled by Jordan. The new Patriarch immediately started moving all religious institutions under his control from West to East Jerusalem, in a clear sign of his distrust of Israeli government.

The next pope, John XXIII, resumed the same course as his predecessor. After his death in 1963, Paul VI was elected the new pope. He became the first pope to visit Israel and Palestine in 1964. In 1969, he received Israeli Prime Minister Golda Meir at the Vatican and expressed criticism of the treatment of Palestinians by the Israeli government, prompting the famous Meir’s response: “Your Holiness, do you know what my earliest memory is? A pogrom in Kiev. When we were merciful and when we had no homeland and when we were weak, we were led to the gas chambers”

In 1993, the pontiff was John Paul II. The situation on the ground was in stark contrast with the Vatican attitude towards Israel and simply ignoring it was no longer an option. Something had to give and the pope agreed to establish formal diplomatic relations between the two countries. The Fundamental Agreement Between the State of Israel and the Holy See was signed on December 30, 1993. In 1994, Israel and the Vatican exchanged embassies. Later that year, the first ambassadors were named, Shmuel Hadas for Israel and Andrea Cordero Lanza di Montezemolo for the Vatican. The Vatican justified its actions by saying that the new relations were a part of a greater Christian–Jewish reconciliation, yet it claims that the relations between the two states are unique, due to the importance of Holy Land in Catholic teachings.