It is well known that Hebrew people have had an interest in beautiful jewelry even since before our era. We have discovered various treasure chests filled with all kinds of gold, silver and jewel rich rings, necklaces and bracelets. Just a few years ago we discovered treasure filled with 3,500-year-old biblical jewelry.

Even today, Jewish jewelers are famous for being very skillful when it comes to crafting a nice piece of jewelry. This is why finding the right piece to gift to your partner, your friend or to a close family member is impossible. You want to show your appreciation, so you are probably looking for something unique. Sure, buying a basic golden ring is always a great gift, but getting something with a Biblical influence will be a lot more meaningful.

Fortunately, we can ease your choice by providing you with what we believe is the most beautiful rare biblical jewelry.

Hamsa Pendant with diamonds and jewels 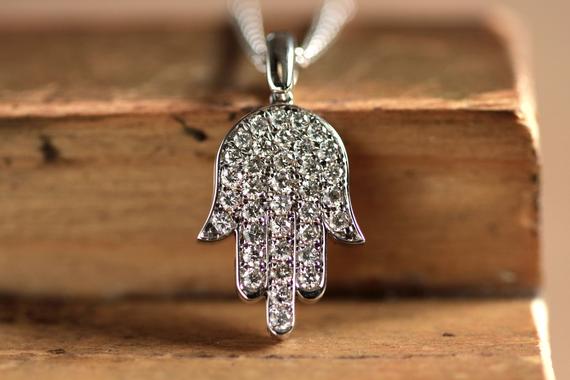 Hamsa is a hand-shaped amulet that has been popular even since the time of Ancient Mesopotamia. This symbol regularly shows up in the Kabbalistic manuscript which means it is part of the Jewish discipline and mysticism. The Hamsa is sometimes also referred to as the first letter of Shaddai which is one of the names that were given to God.

To make this pendant a bit more unique, we recommend getting one that is filled with several diamonds and gemstones which will make for a great heirloom in a family. When your partner will have to give this to your children or grandchildren they will be filled with happiness. This type of an amulet can cost you anywhere between $300 to $650 which is not that much considering just how much meaning it will have to the person you are gifting it to.

The Star of David is one of the most popular symbols that came from Judaism. This hexagram was first seen used by Hebrew people from medieval times. It was usually worn as an amulet to protect people from bad spirits and evil. It became especially popular in the Hebrew community during the 19th century. It was used to spread the Jewish religion and to keep the tradition. It is certainly considered to be biblical jewelry.

So, take give a bit more significance to the Star of David why not get one that is rich with diamonds and made from gold? The contrast between the gold and the diamonds will surely make anyone who sees to want one too.

The Land of Israel or more commonly known as Eretz Israel in Hebrew is the name of a place located in the Southern Levant. There hasn’t been any clear proof about the limits of this geographical location.

However, it is a very important part of Jewish people’s history and it was a way to describe the territory where the Judaism law was practiced. Every other area who did not follow the teachings of the Old Testament was excluded. It is the piece of land that was given to the Israelites by God himself. A direct inheritance.

This is why we believe putting it on a necklace and using it as an amulet is quite a unique idea. Anyone who follows the customs and traditions of the Judaism Law will definitely be happy to receive this kind of gift. So, a yellow or white gold Eretz Israel on a golden chain is definitely a great combination. If you are looking for an exact pendant like the one we described, check out jewish.shop.

Ring with Song of Songs Inscription

The Song of Solomon or Cancitlces is one of the scrolls that were found in the last section of the Hebrew Bible. The final section of the bible is known as Ketivium which could be roughly translated as Writings. What is so unique about this song because it does not spread teaching about the love of God or about respecting the Covenant and the Old Testament, but it is a way to celebrate love and people’s physical attraction. It shows that intimacy between two people whether emotional or sexual is very important in Judaism.

This is why we love the idea of having this as an inscription on a gold ring. Naturally, a ring with this kind of inscription should only be given to your partner since it is a bit more personal. With this kind of a unique idea, you will definitely make him/her happy.

You are probably well aware of the Hebrew letter Chai which is commonly used as a visual symbol. This symbol is quite important in Jewish culture.

According to the historical evidence we have discovered, Chai was often used as an amulet in the 18th Century in Eastern European Jews. However, Chai had long before appeared many times in the Torah. In Kabbalah, this visual symbol is believed to be the closest source of God.

So, if you truly want to show your love to God, to the Jewish Law and the culture, the best way to do it is with a sterling silver bracelet that bears the Chai symbol. To properly display Chai we recommend that you find one that is decorated with different gemstones. Diamonds are a good option, but something more colorful will be a much better combination with the sterling silver bracelet.

Do not be hesitant to buy this type of bracelet for a loved one, a friend or a family member. It will definitely show them that you care about them and their respect for the Hebrew religion.

Wearing a piece of Jewish jewelry is definitely a unique statement and everyone that is part of the religion and culture will recognize it. However, adding the Shema Yisrael prayer as an inscription to your pendant will make it even more special. The Shema Yisrael is one of the most important prayers in Judaism that is done during the mornings and in the evenings.