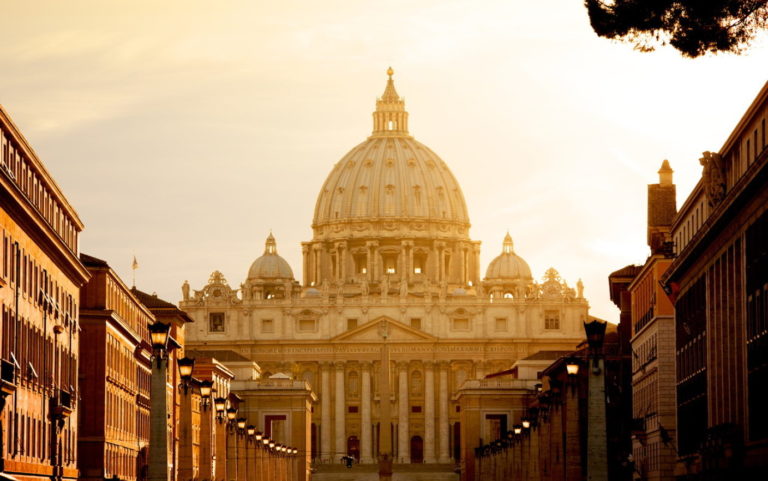 If you don’t know what the Vatican is, it is an independent city-state enclaved within Rome, in Italy. And it is the smallest sovereign state in the whole world, and it has an area of 44 hectares and a population of just about 1,000 people. It was established with the Lateran Treaty in 1929, and it has full ownership, exclusive domination, and sovereign authority and jurisdiction of the Holy See. The Holy See is the name that was given to the government of the Roman Catholic Church, and it is led by the pope who is the bishop of Rome. The pope has his own residency, the Vatican palace, that is within the city walls of Vatican.

How was the Vatican built?

The Vatican started to be recognized as the seat of the Catholic Church when the construction of the St. Peter’s Basilica began in the 4th century A.D. The basilica was constructed over St. Peter’s grave. The site was abandoned when the papal court moved to France in 1309, but the church has returned to Rome in 1377, and some of today’s most popular landmarks were built there. The Sistine Chapel, The Apostolic Palace, and the new St. Peter’s Basilica. But it was centuries after that the Vatican City was established as a sovereign state, as we mentioned in 1929, with the Lateran Treaty.

Why was this site chosen?

In 64 A.D. Emperor Nero executed St. Peter and other Christians at the base of Vatican Hill, that was the time when Christianity still wasn’t embraced by the people and emperors. Many years after that in 313, Christianity was embraced with the Edict of Milan, and Emperor Constantine I began the construction of the basilica over the tomb of St. Peter.

But why was the Vatican built?

We mentioned that the Catholic Church moved the papal court to France, but they’ve returned to Italy in 1377, and they’ve restored the whole site.

Back then the popes ruled a country that was called the Papal States and that was almost the whole territory of modern-day Italy. But at some point the Kingdom of Italy wanted Rome to be the capital of their country and they’ve conquered the Papal States.

Fast forward to 1929, when an agreement was reached with the Lateran Pact in February. The agreement was signed by Benito Mussolini on the behalf of King Victor Emmanuel III, and the agreement established Vatican City as the sovereign entity distinct from the Holy See. The agreement also granted the church $92 million as compensation for the loss of the Papal States. The pope acknowledged the existence of Italy and he promised that he will always remain neutral when it comes to politics and wars.

The city of Vatican today

From that day the Vatican remains an independent state and the home of the pope and the Roman Curia. Today it is also a touristic attraction and the spiritual center for over 1 billion followers of the Catholic Church all around the world. The Vatican is really like a separate country because they have their own banking and telephone systems, their own laws, they have their own post office, their radio and television stations, and newspapers, and even their own pharmacy. An interesting thing is that some of the citizens of the Vatican are the members of the Swiss Guard. The Swiss Guard is responsible for protecting the pope since 1506.

We hope that we cleared a little bit of the confusion if you had any about the Vatican city and why was it built. And we recommend you to visit it sometime in the near future.