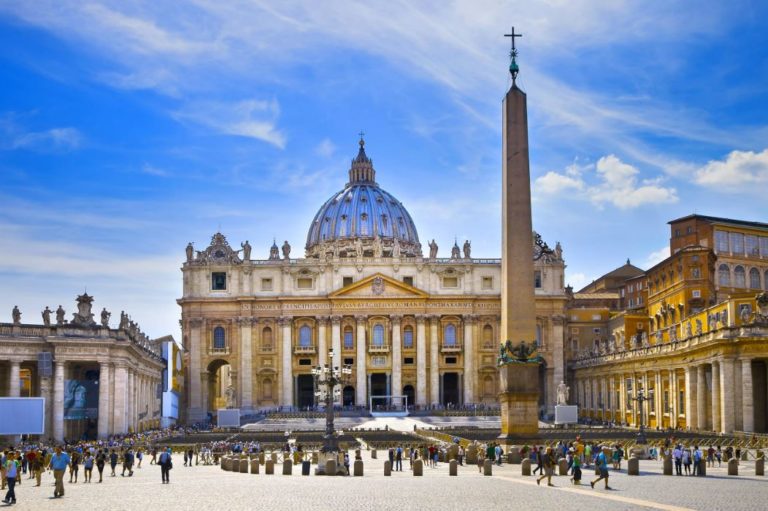 We all know that the Vatican is the smallest state in the world, both in terms of area and population. However, in the Christian world, and above all for Catholics, this country is very important, regardless of its size. First of all, the Pope’s residence is in the Vatican. In addition, in this city-state, there are some very important buildings that we will discuss in more detail below in this article. So, we have prepared the following text in which you will be able to read when the Vatican is actually built and what are the most interesting and historically most important buildings that are symbols of Vatican City. Well, if you’re ready, let’s start.

The Beginning of The Construction of The Vatican

The history of the Vatican, or State of the Vatican City (the official name of this state), is very long, even more than 17 centuries. Simply, it can’t be exactly said when the Vatican was built, because during history, its architecture has been changed and some buildings have been reconstructed and some new ones have been built. Anyway, the first building that was built was the Basilica of St. Peter, in the 4th century A.D. From that moment on, the Vatican has become the focal point of the Catholic Church and a place visited by a large number of Christian believers, every year. After several centuries, more precisely in the 14th century, the Pope seat was relocated to France in the year of 1309.

The seat of the church was in France until 1377, and from that period, several other symbols of this city-state were built. For example, these are the Sistine Chapel, the Apostolic Palace as well as the new St. Peter’s Basilica, renovated during the 16th century.

St. Peter’s Basilica as The Central Building of The Vatican

St. Peter’s Basilica is the most famous and most popular building for all tourists visiting this city. There is an interesting story that happened before the construction of this magnificent building and which is connected with the place where the Basilica is now located. Believe you or not, the area that is the territory of the Vatican, was once a swamp and this area was called Ager Vaticanus. However, as the Roman Empire grew, this area was turned into a location that was known for expensive villas.

The year that is especially important for this place is A.D. 64 when a major fire occurred and destroyed many buildings and other important things of ancient Rome. After this tragedy, in the foothill of Vatican Hill, Emperor Nero executed St. Peter and a few more Christians. However, when Christianity became an equal religion in the Roman Empire, after the Edict of Milan in the year of 313, Emperor Constantine I began the construction of the Basilica, right at the place where is St. Peter’s tomb. Construction began in 324.

After the attack by Saracen pirates in the year of 846, the Basilica was destroyed, and this led Pope Leo IV to order the construction of walls that would serve to protect the city. Construction was completed only 6 years later, in 852. These walls were expanded during the later centuries, until the 1640s, when on the head of the Catholic Church was the Pope Urban VIII.

Another building that was built later in the centuries is the residence of Pope Symmachus. Also, we mentioned that the Pope seat was relocated to Avignon in 1309 and was later returned to the Vatican, in 1377. After that period, the Apostolic Palace was ordered by Nicholas V. The construction of this building took place around 1450. Since then, this building has become the official residence of Pope Nicholas V as well as all the heads of the Catholic Church after him.

According to Zem Builders, this Basilica is one of the construction feats admired throughout the world. Even in Islamic and Orthodox countries, it is considered a pillar of faith.

Another very popular and important building that was created a few decades after the Apostolic Palace was the Sistine Chapel whose construction was ordered by Sixtus V. This building has not only a great religious significance but also a cultural one because the great Renaissance artists Botticelli and Perugino worked on this Chapel.

However, probably the most important artist who worked on the painting of Sistine Chapel’s ceiling is Michelangelo, whom Papa Julius II was engaged in for this job. Also, a very significant contribution to the architecture of the Vatican was given by Donato Bramante who designed the Belvedere Courtyard and was an architect who designed the new St. Peter’s Basilica after destroying an old one which was 1,200 years old.

Unfortunately, in the year 1513, Pope Julius II died, and Donato Bramante died in 1514. This meant that the construction of the new Basilica had to be stopped. The building was continued in 1547 when Michelangelo continued the project according to the ideas of Bramante. In 1590, Giacomo della Porta completed works on the huge dome of the Basilica, and the works were fully completed in 1626. Basilica, with its height of 452 feet, was more than three centuries the largest church in the world. This title was taken over by the Basilica of Our Lady of Peace, which is located in the Ivory Coast in Yamoussoukro and was built in 1989.

Other Significant Buildings in Vatican City

In addition to the Sistine Chapel and St. Peter’s Church, in the Vatican, there are many historically and culturally important buildings. For example, one such is the Vatican Museums that began its existence as a personal collection of sculptures of Pope Julius II. So, this is another landmark of this city-state that is in some way connected with Julius II and this tells us that he was one of the people who influenced the architecture of the Vatican most.

Since its opening to the public in 1773, the Vatican Museum became in some way the first gallery that became available to all visitors. This was done by Pope Clement XIV, and the museum and collection of exhibits were later enlarged by Pope Pius VI. In addition to the personal collection that this museum possesses, it also cooperates with other museums in the Vatican, such as the Ethnological Museum, the Collection of Modern and Contemporary Religious Art and the Gregorian Egyptian Museum.

It is also important to mention the Vatican Apostolic Library which is a building that contains a large number of valuable books. For example, it owns 1.6 million printed books as well as 150,000 manuscripts dating back to the pre-Christian period and period of early Christianity.

The Apostolic Palace is certainly one of the most important buildings in the Vatican because it represents the place that is the residence of the head of the Catholic Church. Although the idea of this palace was created during the reign of Pope Nicholas V, the construction of the present palace and the largest part of the building bearing this name began in the year of 1589 when the Pope Sixtus V was head of the Catholic Church. For this reason, Apostolic Palace is also called Palace of Sixtus V. His successors, Pope Clement VIII, Pope Urban VII, Pope Innocent XI, as well as Pope Pius XI in the 20th century, also expanded the palace and built up its parts.

Although there are many well-known and important buildings in Vatican City to be mentioned, in the end, we will say something about the Egyptian obelisk. This high pillar is located in the center of St. Peter’s Square and carved around 1800 B.C. It was brought to Rome by Emperor Caligula in 37 A.D. Although it seems that this obelisk is standing in the same place for many centuries, in fact, this is not the original place where it was placed. Before the reconstruction of the square that occurred during the 1580s, the obelisk stood at a distance of 500 feet from its current location. Very little is known about the exact origin of this monument, primarily because there is no hieroglyph on it, although it was brought to Rome from Egypt.

In the end, we must say one very important fact about all the buildings that are in Vatican City, as well as the state itself. In 1984, UNESCO proclaimed the Vatican as World Heritage, and this shows us how great is the influence of this smallest state in the world.