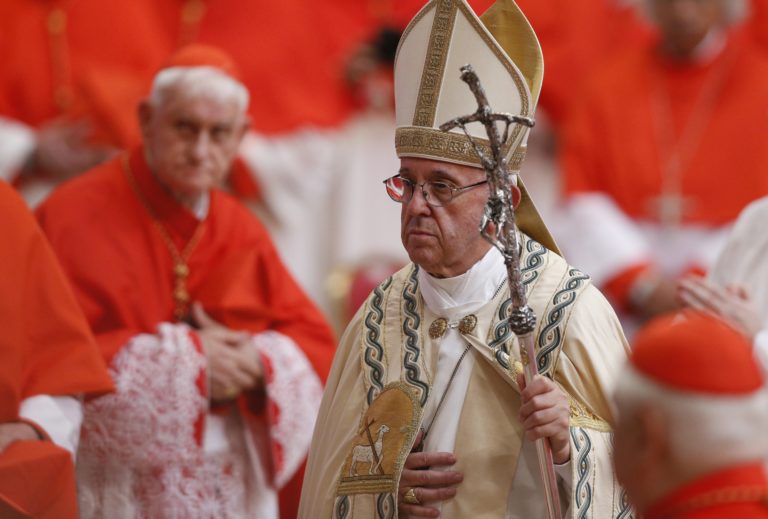 Each and every pope is a mystery for himself and each one of them has his own peculiarities and characteristics. For centuries, they have been considered as the most important people on the planet and millions of people have followed popes and lived according to their preaching.

This is the reason why all the things about popes are very interesting and why people all over the world want to know more about the reasons why they dress as they do. Among many other things, there are also various questions about Pope’s hat, why it is as it is and how it is called. It should be noted that there are a number of those.

If we talk about this type of a hat, we should be most precise as possible and say that this is a crown in its essence and that this tiara was never used during the mass that the Pope was giving, I need to be added that the main purpose of the tiara is to serve as a crown during the coronation of a new pope.

It should be also mentioned that this tiara actually has three different crowns and that each one of the “levels” of the tiara actually has a message why it is there. As far as the coronations are concerned, the last one to be held with a tiara was the one held in 1963, when Pope Paul VI was elected as a new pope.

This is a hat that many people imagine when they see a pope and that reminds them of a pope. In essence, this is simply a larger hat that is mostly white with golden and other ornaments. It should be also noted that this hat should be considered as the ceremonial head that is not only worn by the pope but by other clergy officials and bishops in the entire Christian world. It needs to be stated that Mitre has developed throughout the course of history and that it was once very common and plain while it is heavily decorated now with a lot of priceless ornaments and diamonds.

In the Catholic Church, there are three types of these. The first one I Simplex and it is the simplest one that is all white and it is made of linen. This one is most commonly worn during funerals and masses.

When cardinals are in the presence of the pope, they wear this one. The second type is called auriphrygiata. This one can either be plain gold cloth, or it could even be white silk that is decorated with gold. The bishops are the ones wearing these. The third version of this is the pretiosa.

It is called this due to the fact that there are various precious stones and gold that decorate it and it is most commonly worn during the time of a principal Mass. The popes usually wear this one and it should be also noted that it is made for a Pope according to his own preferences. The importance of mitre can also be seen in the fact that it is located at the top of the papal arms.

This is another known hat of the popes and it is usually worn by other clergy members of the Catholic Church. It should be also decided that these hats are present in various colors in the Catholic Church and that different ranks within the church, and different orders also, are assigned zucchettos of various colors. It should be mentioned that the popes use to wear a white one.

This hat is also used during the visits of the popes when popes wear it constantly. This hat also has another function. More precisely, it is often given away as a kind of a gift of the pope who can either hand it over to a believer or he could even decide to put it on a believer’s head.

The camauro is a medieval-style headdress, composed of red velvet bordered with white at the height of the forehead and lateral protrusions to also cover the ears and replaced the biretta of the Popes.

This hat, like the mortarboard, developed from the academic cap of the middle ages. It is a garment of the Renaissance that appears in hundreds of papal portraits in the Vatican Pinacoteca, whose name comes from the Latin, “camaleucum,” adaptation of the Greek “kamelaukion”: a camel’s fur cap, although it is made of ermine-lined velvet. When Pius XII died, he was shrouded with Camauro.

When someone saw him like that, he warned that the Holy Father did not like him. But they replied: “The dead do not send an explanation.” So, when Blessed John XXIII first wore a “Camauro,” the garment had been in disuse for sixty years, and some interpreted the gesture as an indication of a conservative pontificate.

This is is a hat with a wide brim and hemispherical cup worn by the Catholic clergy. In Italy, they call it a Saturn hat because its shape resembles that of the ringed planet Saturn.

Pope Benedict XVI wore it during a General Outdoor Audience, in 2007.

Its tile is made of beaver felt or dyed straw and is usually lined internally with silk. It has a practical purpose, the same as any commonly used hat, and is never worn during liturgical acts. It is smaller than the Capelo or Galero, for ceremonial use, which until 1969 was part of the coral costume of bishops and cardinals, who dressed him when they went to the church to pontificate or was held by a family member when he wore mortarboard.