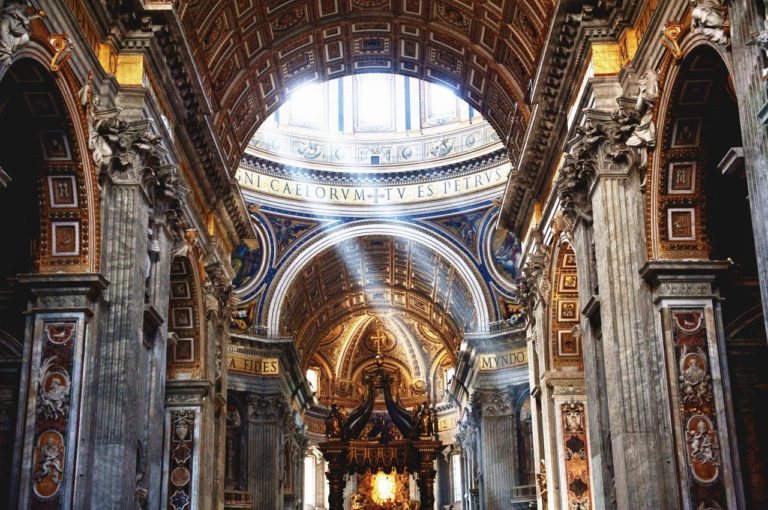 The world has many amazing museums to visit, and artwork we can see there enriches our souls. Whether you enjoy Renaissance paintings, ancient sculptures or want to see contemporary art – this is a special treat for all museum lovers. We will take you to the Vatican Museums.

Secrets Of The Vatican Museums

The Vatican is located in the heart of Rome, Italy, and is also the seat of the Catholic church. It is a place that the Vatican Palace houses museums of the same name, and they are among the most famous museums in the world for their invaluable collection of artworks.

The lavish buildings are full of treasures that have accumulated in them over the centuries. It is fascinating to see that four million visitors come to visit these museums each year to view the precious masterpieces, beautiful sculptures, and some extremely valuable books. And indeed, we can see some of the greatest artistic creations of all time here.

Pleasure For The Eyes

One can enter the Vatican Museums through the beautiful Vatican Alley. First, you will see and pass through a carved door designed by Cecco Buonanotte in 1999 – which symbolizes the entry of the Vatican into the new century. Other works in the museum carry the spirit of the age of thousands of years. The collection consists of statues, textile fabrics and paintings reminiscent of ancient history. However, not all works of art can always be seen, as in some cases they travel and are shown in other museums around the world.

The Vatican Museums are unique for their buildings, starting with the ceiling painted by Michelangelo. Although you can forget about the camera because photographing is forbidden, it would be good to bring binoculars to get a good look at the ceiling of the Sistine Chapel. A room dedicated to Rafael will surely inspire. If you want to avoid the crowds, you can also arrange a visit to the museums on Friday nights.

The Basilica Of St. Peter

The Vatican Museum is a Seat that contains many important and valuable relics, frescoes and historical records that every pope of his time wanted to preserve. When you enter the Vatican, even though you are technically still in Rome, you first find yourself in St. Peter’s Square, where the Basilica of St. Peter, the main Vatican building. That is the most important religious building for Catholics in which the apostle Peter and the first pope were buried.

As its interior is imposing, there is an almost festive atmosphere of enthusiasm among all visitors, suggesting that you truly are in an important place. What you’ll be particularly pleased to see is Michelangelo’s famous sculpture, “Pieta,” which is even more divine when you see it – than in any art history book or encyclopedia.

Seeing A Masterpiece From Close Up Range Is A True Pleasure

Certainly, many of these artworks are already well known to you. You can see them thanks to modern technology in so-called virtual tours, or even buy some of the reproductions on the websites of well-known galleries such as Meisterdrucke. That’s good – especially if you are an art lover or you want to learn more about the history of art.

However, you will have the right experience and true pleasure when you go to the museum and see some of these masterpieces from a close range.

The tour also comes with a very interesting exhibition of Gallery Of Maps which shows a series of topographic maps of Italy. These maps are interesting because they depict the world at the beginning of the new century from a perspective of that time.

The Gobelin Gallery is also exceptionally richly – furnished and decorated with many beautiful handicrafts, and in particular, there are beautiful curtains made of wool and silk. They whisper the stories from the Raphael drawings – bringing them closer to all the visitors.

The other rooms in the Museum show many items dating the antique period. These were the items made by the old Etruscans who used to live in central and northern parts of today’s Italy.

These ancient people have made some extraordinary and accommodating things out of mud and clay. This part of the museum was built up in the nineteenth century by Pope Gregory XVI. The inestimable items assortment contains many golden and bronze items, as well as statues.

In the same setting, there is a nine-room Egyptian Museum full of works of art from ancient Egyptian time. It was the time the Pharaohs walked the land and these pieces were brought by the Italians to Rome from the great Egyptian Empire. Among the many objects, some sculptures stand out.

These are the sculptures depicting the pharaohs who ruled in ancient Egypt, and one of the most impressive works in the museum is the statue of Ramses II sitting on his throne. The magnificent building of the Egyptian Museum was built by Pope Gregory XVI.

Finally, space where everyone can feel the thrill of entering it – the place where inspiration and the curiosity of creation, provokes the greatest excitement. Yes, it is the Sistine Chapel. Known worldwide for its murals, created by Michelangelo and other important Renaissance creators such as Sandro Botticelli, Pietro Perugino, and Pinturicchio.

The chapel simply radiates divine power and human creativity. On entering, everyone’s eyes are drawn to the sumptuous and beautiful vault of the Sistine Chapel, which Michelangelo painted in just four years.

From these paintings, it is clear that his artistic skills simply contradicted the laws of physics. Each of the characters shown was first painted on paper and then transmitted to the wall. Michelangelo carved the drawings directly onto the plaster surface by using a knife. He completed his incredible work before the death of Pope Julius II. In the chapel is another indispensable work that can be seen behind the altar, the fantastic “Last Judgment”.

Although the Sistine Chapel is daily crowded with visitors around the world, it will win everyone’s heart at a glance. If you’ve never been to the Vatican before and haven’t visited the Vatican Museums, it might be time to do it.