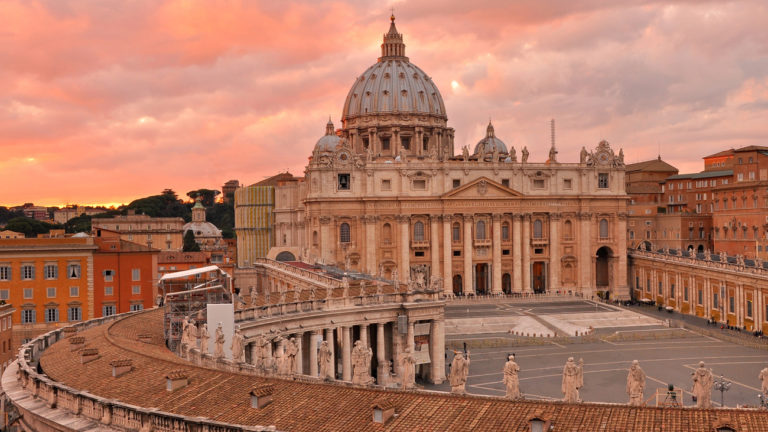 The Vatican may be the smallest country in the world by both size and population (about 1,000 people live on 110 acres), but is also one of the richest in history and as such it has plenty to offer to its visitors.

Vatican City is the last remnant of once powerful Papal States, established in 754. The States lasted until the reunification of Italy in 1870 when all the lands were seized by the newly created Kingdom of Italy. All that remained was a small area within Vatican walls under Papal authority. The status of Vatican was officially recognized by Lateran Treaty, signed by Prime Minister and Head of Government Benito Mussolini on behalf of King Victor Emmanuel III and by Cardinal Secretary of State Pietro Gasparri for Pope Pius XI. The treaty was modified in 1970. Pope remains the absolute power in the executive, legislative and judicial branches over Vatican City and is the only absolute monarch in Europe.

Vatican Museums is a complex of museums located in Vatican City. It is one of the largest museums in the world and with more than six million visitors in 2017, it is 4th most visited art museum in the world. It contains some of the greatest art created in human history, including the works of Raphael, Michelangelo, Carlo Carrà, Giorgio de Chirico, Vincent van Gogh, Paul Gauguin, Marc Chagall, Paul Klee, Salvador Dalí, and Pablo Picasso.

Vatican Historical Museum was founded in 1973 at the behest of Pope Paul VI. It is rarely included in private tours, but it is a must-see for every history buff visiting Rome.

If you are short on time, this is probably the best offer for you. You will spend three hours touring St Peter’s Basilica, Sistine Chapel and Vatican Museums and get to see Gallery of the Maps and Raphael’s Rooms. The tours are held at regular intervals during the day, so you can choose which one is best suited for you or you can upgrade it to a small-group evening tour.

Sistine Chapel Private Viewing is your best choice for enjoying the Sistine Chapel. You will be ushered through a private entrance into the chapel and get a chance to visit some of the rooms in Vatican Museum other tours usually bypass. Some of the highlights include Bramante Staircase, the Sala degli Ori (Room of Gold) and the Fra Angelico frescos in the Niccoline Chapel. The best part is an after-hours tour of the Sistine Chapel itself, accompanied by a commentary from a guide, something that you won’t get as a part of regular tours. You will spend at least half an hour inside the chapel, which is more than enough to really absorb the beauty of it.

The Vatican with Early Entrance

Another private tour, but this time for early birds. You will meet your guide early in the morning, long before the gates open for regular visitors. The tour lasts three hours and you will enjoy the museums without the usual crowds. The tour encompasses Vatican Museums, the Sistine Chapel, and St. Peter’s Basilica, all under the supervision of your private guide offering insights into history, politics and interpersonal intrigue that happened on these grounds and offering expert comments on everything you want to know.

What better way to start your day in Rome than breakfast in either the Pinecone Courtyard or the Vatican Cafeteria, followed by open-air coach ride through the Vatican Gardens. Here you can see the mediations gardens, as well as a private helipad. After that, it is back to the Vatican Museums and a tour of the magnificent Sistine Chapel and St. Peter’s Basilica before the crowds come pouring in. By the time regular visitors start arriving, you will be back in your hotel, ready for the rest of your day.

The Vatican for Kids Private Tour

It would be a shame to bring kids to Rome and not show them at least some of the art on display in the Vatican. Unfortunately, regular tours can be boring even for adults, not to mention kids. That is why special tours designed for kids are offered. The tour includes Vatican Museums, including the Sistine Chapel, and the tour of St Peter’s Basilica. The added twist is that guides are trained to present the tour in a manner that is interesting for kids. Not only will they enjoy themselves, but will learn something as well, like the true origin of Teenage Mutant Ninja Turtles’ names.