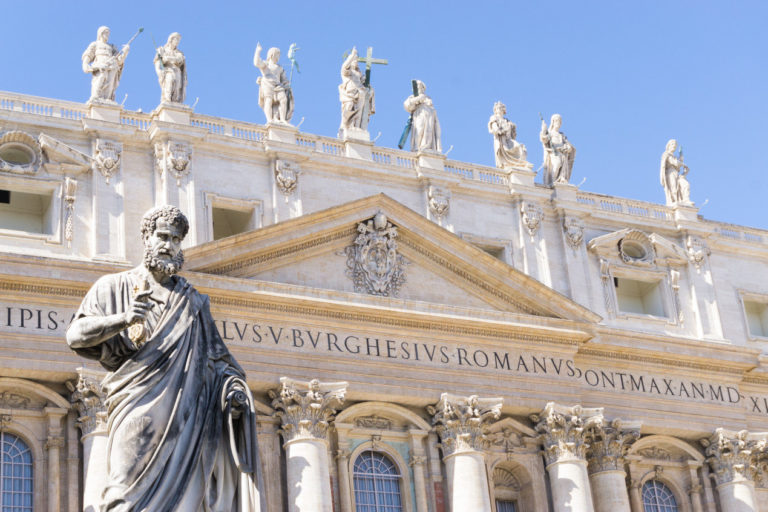 This marvelous building in the Vatican was designed by Michelangelo, Donato Bramante, Carlo Maderno and Gian Lorenzo Bernini, and therefore, it is the most renowned work of the Renaissance architecture movement as well as the largest church in the world. Although it is not the mother church of the Catholic faith nor the main cathedral of the Diocese of Rome, this religious building is one of the holiest Catholic shrines in the world. Many have described it as “holding a unique position in the Christian world”, as well as being “the greatest of all churches of Christendom”.

According to the Catholic tradition, this basilica is the burial site of Saint Peter, the leader of Jesus’s apostles and the first Bishop of Rome, which is the Pope. His tomb is thought to be directly under the high altar of the basilica, which is why many of the popes have been interred at basilica since the Early Christian period. There has also always been a church on this site ever since the Roman emperor Constantine the Great. The Old St. Peter’s Basilica stood there from the 4th century AD, and was replaced with the new, construction of which began on April 18, 1506. It was completed on November 18, 1626.

The Tomb of Saint Peter

AS mentioned, it is said that Saint Peter’s tomb is directly under St. Peter’s Basilica, and includes several graves and one structure. The authorities of the Vatican say these have been built to memorialize the location of the grave. The tomb itself is close to the west end of a set of mausoleums from between 130 and 300 AD. This complex was somewhat torn down and filled with earth, which was needed for the foundation for the first St. Peter’s Basilica while Constantine I the Great was ruling around 330 AD. Since then, many different bones have been found at the site of this 2nd-century religious shrine, most during the two archaeological excavation campaigns. They were carried out by Pope Pius XII states in December of 1950. However, none were able to be confirmed as the remains of Saint Peter with certainty. Following this important discovery, as well as the one confirming bones were transferred from a second tomb, Pope Paul VI said in June of 1968 that the relics of Saint Peter were identified as convincing.

The grave for which the church had claimed it was the one of Saint Peter is at the foot of the aedicula under the floor. There are remains of four individuals there, as well as several farm animals inside the grave. In 1953, following the first archeological efforts, there was another set of bones found said to have been removed, without the knowledge of the archeologists, from a niche located in the north side of a wall that leans on the red wall on the right of the aedicula. The following tests indicated that these are the bones of a 60-70-year-old male persona. It was therefore argued that these bones are the true remains of Saint Peter and that they had been moved. It was also said that this happened “at the time of Constantine, after the peace of the church”. Antonio Ferrua, the lead archeologist during this important excavation effort, said that he was not really convinced these bones are the remains of the leader of the apostles, Saint Peter.

The area of the lower floor inside of the St. Peter’s Basilica lies above the site of the alleged tomb of the great Saint Peter. One part of the aedicula that used to also be a part of Peter’s tomb rose above the levels of this floor, and it was remade and repurposed. It became the Niche of the Pallium that is now there.