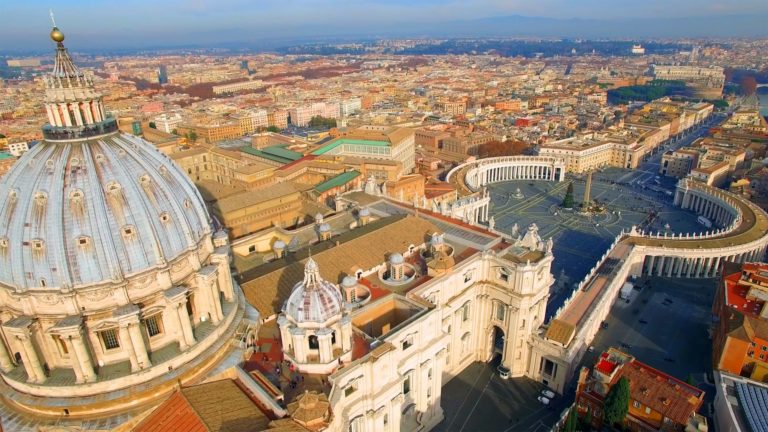 When you think of Vatican City, you think of the home of the Pope and the center of the Christian world. If you know that Vatican City is located in Rome, capital of Italy, you will probably say that the official Vatican City language is Italian, which is partly true. You can also hear inside the walls of the Vatican City Spanish, English, French, German, even Arabic.
Besides the living and regular European languages in Vatican City, you can read and hear Latin, a dead language. Latin is only alive here, and all the documents of the Holy See are written in Latin. The most used language is Italian, but back in the 17th century, Latin was the language of scholars, that was the language of science, religion, and art.

All the countries that surrounded the Mediterranean were using Latin, and language died only because Western Europe population prefer to speak in their mother tongue. In the Vatican state, Latin is alive and it is used every day in the communication of the inhabitants of the Vatican.
The Vatican laws are Italian, it is still stated in Italia, but the Guardians of the Vatican speaks German. How is this possible? The guard on the gates of Vatican is a part of the Swiss Guards, and they obey commands given in German. When the Swiss Guards take the oath to the Pope, which includes sentences of loyalty and protection, they say it in their native language.

The Swiss Guards have their music band, and football team, so in their spare time they play music and sport, and they live inside the Vatican city in barracks. They are one of the most loving sightseeing in the Vatican for tourist in their colored uniforms.

If you are planning to visit Vatican City do not be afraid, English is the universal language when it comes to tourists so that you can ask for information in English. There is no language barrier here.
The official online paper is published in several different languages, where you can read news about Pope, find prayers, when he is holding public audiences, and when he will go to a summer residence in the town of Castel Gandolfo. Reading this article, you realize that Vatican City does not have an official language but just one part of the ministry, the official Vatican website host more than ten languages.

Most of the everyday news is written and published in the local language, Italian, but all liturgical documents are written and spoken in Latin. The Masses are spoken in Italian but also in some other languages depending on the speakers and audiences.

The conclusion is simple, Vatican City cannot have an official language because the Christian world does not speak one language, and the believers must understand their leader, in this case, Pope. We can say that Italian is the main language but it is no official and does not fear dead language Latin. You can speak English while visiting the Vatican. Outside the Vatican the official language is Italian, after all, we are in Italy. The people who live and work inside Vatican City speaks many languages (Spanish, Portuguese, German and French) because the Vatican City is one of the most visited places in Rome.

The official language of the Holy See is Latin, and all the documents are written in Latin. For example, in 2013, Pope Benedict`s XVI resignation speech was entirely written and spoken in Latin, so all of the commentators did not understand what happened, but it was the exception, not the rule.

At the moment, Papacy has realized the power of media and social platforms so the Vatican has his own Facebook Page, YouTube channel and Pope has his own Twitter feed when he writes on English.