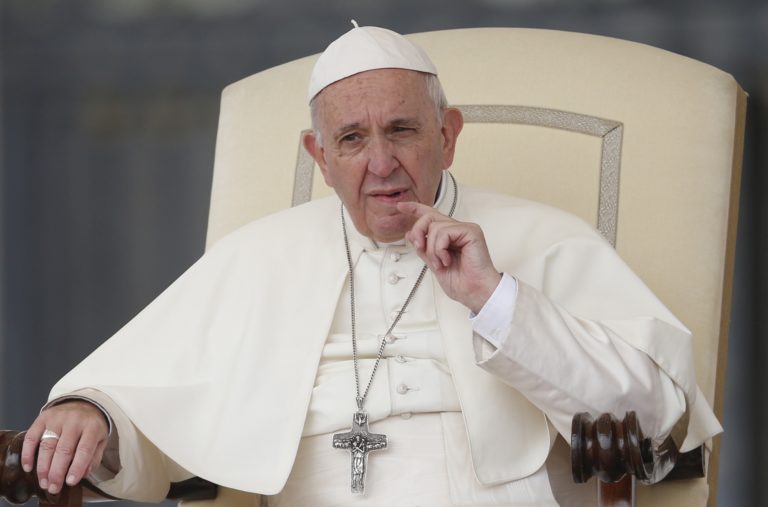 We have all seen pope wearing a large cross or crucifix around his neck, but not many know what it signifies or in what form it can be used.

This particular piece of jewelry is called a pectoral cross since it is worn on a long chain so that it rests on the chest. For ages, it has been a symbol of faith, worn by both laity and clergy, but since the end of the Middle Ages, it has become a sign of church authority. According to Vatican rules, it can be only worn by popes, cardinals, bishops, and abbots.

The first mention of the pectoral cross was first mentioned by Pope Hilarius in 461, but it wasn’t until the 14th century that practice really took off. Pope Pius V was the first pope to change the Roman Rite to include a mandatory pectoral for popes in the late 16th century. It has become a part of pontifical vestments, together with mitre, chasuble, pontifical dalmatic, zucchetto, ecclesiastical ring, and crosier. A pope also wears a triregnum crown, in addition to the above. This tradition of pontifical vestments has been observed in almost all Christian denominations, but the use of pectoral cross somewhat differs from church to church.

In Anglican Church, the use of the pectoral cross is reserved for bishops. Usually, they wear just the cross, and not a crucifix. The cross itself can sometimes be decorated by amethyst and is worn on a simple golden chain. Anglican priests and other clergies can wear crosses around their necks, but these are much more modest, as to not be confused with bishops. In 2009, Pope Benedict XVI gifted a pectoral cross to Archbishop of Canterbury Rowan Williams. Such is the significance of pectoral cross that many have interpreted this as a sign of recognition of the Archbishop’s episcopacy by the pope, despite the previous papal bull proclaiming Anglican Church “absolutely null and utterly void”.

In Orthodox churches, there is a clear-cut hierarchy based on seniority and modeled on the Russian model. The first step is a silver cross, which all priests receive from their bishops on the day they are ordained. The bishop may also punish a priest by forbidding him to wear a cross for various infractions. The next in line is golden cross, worn by archpriests, abbots, and abbesses. Ordinary priests can also receive them as a sign of distinguished service. Finally, bishops, archimandrites and protopresbyters wear a decorated cross as a sign of their office. The decorations are usually jewels or enamel, hence the name Jeweled cross.

The Greek tradition is somewhat different since not all priests wear a pectoral cross, only those who have distinguished themselves in service.

Protestant churches, like the Church of Sweden, prefer simple Latin cross, without any adornments. The only bishop wear them. The only exception is the archbishop of Uppsala, whose cross has golden rays.

The question of adornments leads us back to popes, specifically Pope Francis. For centuries, popes and cardinals competed who will wear more richly decorated cross. Many of them were worth a fortune. The more expensive cross, the bigger the power and influence the wearer wielded inside the Church. Pope Benedict XVI also had a few who were adorned with precious stones. Once elected, Pope Francis decided to do away with all excesses, and the pectoral cross was among the first indicators of his stance on the matter. His cross is the one he has been wearing for a long time. Designed by Antonio Vedele and made by a master craftsman named Guiseppe Albrizzi of Pavia, the cross features a shepherd returning one sheep to the herd. It is a parable of Luke 15: 4-7 that says: “What man among you having a hundred sheep and losing one of them would not leave the ninety-nine in the desert and go after the lost one until he finds it?” It is made of sterling silver apart from the relief, it has no other adornments.

Albrizzi is very proud about his work, saying: “The cross was made by me, but it was drawn by my teacher, Antonio Veldele, for whom I worked until 1978. I am grateful for everything he taught me, the teacher who created the cross of Pope Francis.”