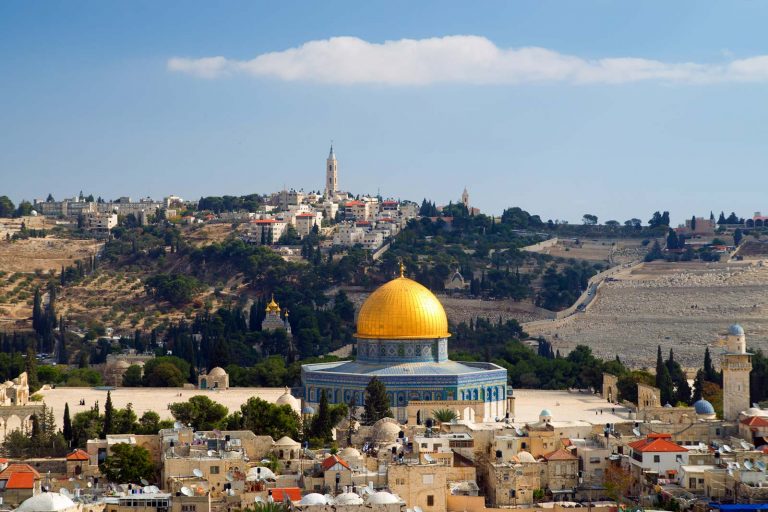 The focal point of Christianity, Islam, and Judaism – the city of Jerusalem is undoubtedly one of the most sacred places in the world for believers. With a rich history that dates back to more than 5000 years, Jerusalem is dotted by religious sites including Nazareth, Bethlehem, and the Sea of Galilee, which are mentioned in the Holy Bible.

The depth and natural beauty of Jerusalem remain staggering as does its scope of religious history. And the sheer number of religious tourist spots can easily perplex first-time visitors. But here are the ten most significant sites that pilgrims must include in their list.

1. The Church of the Holy Sepulchre

The Church of the Holy Sepulchre holds the two most main religious sites for Christian pilgrims– first, the site where Jesus Christ was crucified, also known as Calvary; and second, the empty tomb of Jesus that is traditionally known for his interment and resurrection. This holy church is famous for having one of the most complex architectural designs in the world. You can check out thewanderclub.co to know more. It encompasses the final five stations of the Holy Cross and is hailed by the six different sects of Christianity- Greek Orthodox, Roman Catholic, Armenian Apostolic, Syriac Orthodox, Coptic as well as Ethiopian churches.

Discovered in the year 1867 AD, the Garden Tomb is hailed by some Christians as another location for Christ’s crucifixion, burial, and resurrection. According to them, a specific rock structure resembling a skull is probably the one mentioned in the Bible as Calvary or Golgotha. The Garden Tomb is blessed with natural beauty and provides a serene ambiance for praying and reflecting. It comes with world-class tourist facilities including wheelchair access for the aged and physically challenged visitors.

The Via Dolorosa or the Way of Sorrow follows the traditional path that Jesus had treaded, carrying his cross on his back, to be crucified at Calvary. Tradition says that it was here that the Roman soldiers had whipped Christ after he was condemned and penalized with death. Visitors can either sign up with daily guided tours to walk this route or explore by themselves easily. Every Friday, the Franciscan brethren carry out a procession along the Via Dolorosa that contains the 14 Stations of the Cross. Along the route, the Church of Flagellation and the Church of the Condemnation and Imposition of the Cross deserve special mention.

Tradition says that the Church of Nativity or the Basilica of Nativity in the town of Bethlehem contains the grotto which is the place where Jesus was born. Located in the West Bank, this church bears the utmost significance to believers of Christianity all over the world. This is the oldest Christian church in the whole world, located roughly 10 km away from Jerusalem in Bethlehem. The church encompasses a massive 12,000 sq. m area containing a Roman Catholic, a Greek Orthodox, and an Armenian Apostolic church.

According to the Gospel, many important events took place in Mount Zion, which stands beyond the walls of Old City. Events like The Last Supper, and the visitation by the Holy Spirit on the disciples, also known as Pentecost, are believed to have happened at the holy site of Cenacle. Mount Zion contains many significant churches, among which the Church of the Dormition Abbey is hailed as the place where the Virgin Mary had “fallen asleep” i.e. breathed her last.

Within the Old City walls, the Christian Quarter is considered the epicenter of Christianity. It comprises forty of the holiest sites in Christianity including the Church of the Holy Sepulchre and the Via Dolorosa. The Christian Quarter is the ultimate delight for religious tourists looking to buy souvenirs to bring back home. This place is dotted by hundreds of shops selling rosaries, Holy water, and many other souvenirs from the Holy Land. Other significant sites here include the Protestant Church and museum, the Ethiopian Monastery and the Lutheran Church of the Redeemer, and its bell tower that offers a breathtaking panoramic view of the Old City.

7. Church of St. John the Baptist

Constructed during the 5th century, The Church of St. John the Baptist is the oldest church in Jerusalem. Identified by its glorious silver dome, this church has a unique architectural design that differentiates it from the Franciscan Church on the Mount of Olives.

The Chapel of Ascension represents the place from where Jesus Christ ascended to heaven, forty days after the resurrection. Tradition says that this church is home to a stone slab that may bear one of the footprints of Jesus Christ. Till 1187, a large Christian church built by St. Helena marked the original spot. Today, this chapel bears immense religious significance to both Christians and Muslims, who also recognize the ascension of Jesus Christ to heaven.

10. Church of All Nations

The Church of All Nations also referred to as the Basilica of Agony, is located on top of the Mount of Olives. This is a Catholic church that is home to a fragment of the bedrock where Jesus is believed to have prayed before being convicted. Since twelve nations contributed to its establishment, it was named the Church of All Nations. Remnants of the fourth century and Crusader churches are also present in the area and open to tourists.